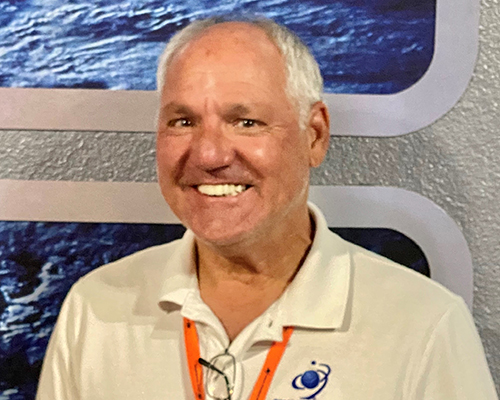 These Volunteer Spotlight articles profile some of the interesting and dedicated people who make Space Foundation programs possible. We could not do the work that we do without the generous and tireless support of our volunteers. This week, we are featuring Space Foundation Discovery Center volunteer Ken Bond.

Professionally, Ken spent five years as a test engineer at the Space Simulation Lab (SSL) at Lockheed Martin in Littleton, Colorado. The most interesting project he worked on there was doing the thermal vacuum testing of the Magellan spacecraft, which successfully radar mapped the surface of Venus beneath the clouds — a composite photograph of which is coincidentally
on permanent display in the Discovery Center’s Science On a Sphere® theater.

Bond later moved to Houston, Texas, to continue his testing career at the Johnson Space Center with the Crew and Thermal Systems group. That group supported 26 space shuttle missions by testing all of the components and equipment that were aboard each flight — plus the astronauts! His group trained the mission specialists to use their spacesuits properly and performed practice missions in vacuum chambers to prepare them for the environments they would encounter in space.

When Bond returned to Colorado, he continued as a test engineer/project manager for 16 years in support of the U.S. Air Force in sustaining the engineering of the Satellite Control Network.

After Ken’s retirement he visited the newly opened Space Foundation Discovery Center and was delighted to find a space shuttle spacesuit prominently displayed in the lobby. After talking to him, the Discovery Center’s education staff asked Bond to come back and share some stories from his professional experience with the docents … and he’s kept coming back ever since.

Bond’s favorite exhibit in the Discovery Center was initially the spacesuits, but that has evolved over the years as new exhibits have been introduced. The Mars Robotics Laboratory, with its iPad-controlled rovers is his current favorite, and consequently he usually goes home with his white shirt covered in red dust from the lab’s simulated Martian environment. With the Curiosity rover currently mapping Mars and the Perseverance rover on its way, he’s noticed that there has been an increased public interest in how rovers work.