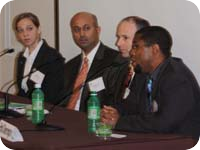 On Nov. 18, the Space Foundation hosted a discussion and briefing for congressional staff on its Solutions from Space white paper, Space Applications for International Development. The paper recommends that governments in developing nations consider investing in affordable ground technology to provide satellite communication access in rural areas, particularly for clinics, schools, and other community centers. The technology would be used to directly address the U.N. Millennium Development Goals, as well as national goals in health, education, and other areas.

There were 55 attendees, including staff from the personal offices of House and Senate members, and professional committee staff from the House Science and Technology Committee and Senate Commerce, Justice and Science Appropriations Subcommittee. Other notable government officials represented NASA, GAO, and Department of Commerce, plus industry representatives, and foreign representatives from China, Europe, and Russia.

The briefing featured presentations from two panels of experts.

The second panel of speakers covered Capacity Building and included:

They addressed issues related to capacity building, developing a legal and regulatory framework for space newcomers, and a need to better integrate space operations among nations.

“The audience members I spoke with gave us high praise for the presentation,” said Marty Hauser, vice president, Space Foundation Washington operations, research and analysis. “And several mentioned this is an area that needs more attention. They thanked us for increasing visibility.”