Getting Our Next Generation Priorities Right 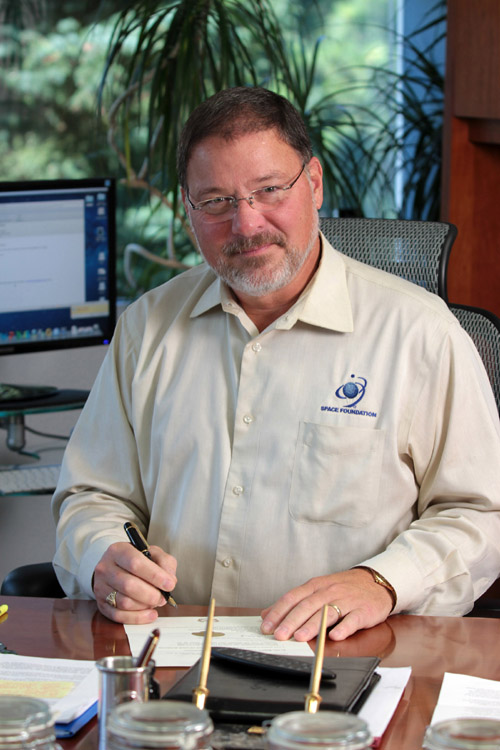 2014 is likely to be another tumultuous year around the world, and especially here in the United States. At this writing, crippling federal budget uncertainties, which have hung like the sword of Damocles over the nation and our industry, appear to have been addressed with the passage of a two-year budget agreement. This welcome news will pour a little calming oil on the water, but with election year gyrations ahead and post-Snowden stresses on vital international relationships lingering, I think we’re going to continue to enjoy the curse of living in “interesting times.”

For our space industry, the global growth of commercial products and services derived from space will likely continue to mask our biggest underlying challenge — lackluster investment in crucial government space programs. While the commercial space sector dominates our industry in terms of global revenues and economic value added, it is largely the government sector that incubates the technologies of the future, monitors the space environment and engages in exploration and risk taking that, when done well, inspires the next generation.

As we begin a new year, it is this “next generation” piece of the equation that concerns me. And not just because so much of global government space spending is going toward the mundane and uninspiring, but because traditional leaders in space — the United States, Russia and Europe, for example — appear content to let our next generation stagnate behind lackluster academic achievements and disappointing declines in the performance of our educational institutions.

The latest data from the Program for International Student Assessment (PISA) was released just before the end-of-year holiday break. It revealed that between 2009 and 2012, teenage students in the United States slipped from 25th to 31st in math, from 20th to 24th in science, and from 11th to 21st in reading. Also declining were Liechtenstein, Switzerland, Netherlands, Canada, Poland, Australia, Iceland, Denmark, New Zealand, France, Norway, Russia, Sweden, Hungary and Greece.

One must be careful in the world of statistics, because correlation does not prove causation. However, it is interesting to note that where we have mature, “routine”, operationalized government space programs — the U.S., Europe and Russia — we also have declining educational performance in the STEM disciplines (science, technology, engineering and mathematics). Where are STEM scores improving?  In those countries with risky, exciting, emerging space programs — China, South Korea, Japan, Brazil. (There’s no data for India, as it doesn’t participate in the PISA process.)

Naturally there are plenty of ways to interpret the PISA data, and plenty of factors besides national space programs that affect student engagement in STEM disciplines and outcomes in STEM testing. There are also some interesting statistical outliers: For example, despite slides in STEM scores across most of Europe, Germany is showing great improvement as a result of educational reforms.  Also, even within a declining U.S. there are pockets of excellence; Maine, for example, is improving as dramatically as some East Asian nations.

What seems to make the difference is the overall social and cultural importance that is ascribed to education. And this is where I have the greatest concern for the United States and Europe. It doesn’t take too many headline stories to conclude that what has become most important in western society is sports and entertainment. Rather like the oft-maligned Roman Emperor Nero, who is infamously known for fiddling while the Great Fire of Rome burned in 64 AD, we seem excessively focused on “building theaters and promoting athletic games,” two of Nero’s top priorities.

I would offer as Exhibit 1 for this thesis a story that broke December 4, 2013 — that of free agent outfielder Jacoby Ellsbury signing a $153 million contract to play baseball for the New York Yankees. Ellsbury batted .298 in 2013, meaning he had an “at bat” failure rate of 70 percent. If you or I failed in 70 percent of our work undertakings, we’d be collecting unemployment, not a signing bonus.

At any rate, this kind of insanity has become prevalent in our society, with participants in “athletic games” routinely signing contracts for $160 million (Matt Kemp, Manny Ramirez), or even $275 million (Alex Rodriguez). Over in the NFL, even losing players rake it in: Calvin Johnson, Detroit – $132 million. Eli Manning, New York – $107 million. Donovan McNabb, Philadelphia – $115 million. Michael Vick, Atlanta – $130 million.

As my wife would say: “Boys playing a game with a ball.”

All of this only seems the more obscene when you consider that the average public school teacher in the U.S. earns a whopping $56,069 per year, as compared to an annual salary of $88,454 for other professionals in the country. (Countries like South Korea, which performed well in the PISA assessments, pay teachers more than the average professional salary, not less.)

Another interesting bit of information to help calibrate where our priorities lie is this info-graphic map from the sports news web site Deadspin.Com, showing the highest-paid public employee for every U.S. state. For 80 percent of U.S. states, the most highly paid public employee is a sports coach: 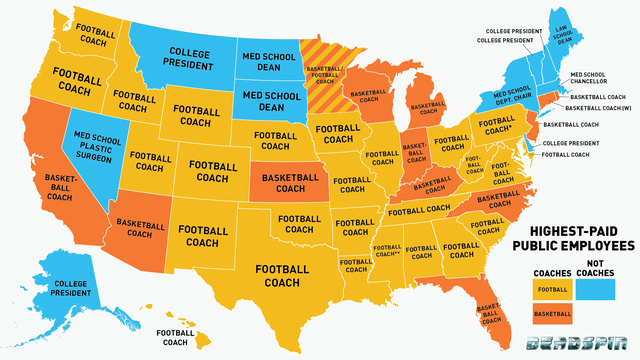 I suppose The Rock covers the “sports entertainment” crossover category. I have no idea what Hulk Hogan made last year.

The point isn’t to berate these people for what they make. It’s still a (mostly) free country, and we’re all entitled to get ahead, if we can still figure out a way to do that. But I do think it’s fair to suggest that we’re spending way too much time and money figuring out how to fill our plasma televisions with distractions from reality, and too little time on building an actual future that’s as exciting as a Hollywood movie or an NFL football game.

It’s not that we don’t have the money. Tech giant Apple Computer reportedly sold 130 million iPhones in 2013, at an average price of $300 per unit. That means that those of us who just have to have the latest Apple bling-bling shelled out about $39 billion in mad money for it, or more than twice what the U.S., as a country, invests in NASA. There is something wrong in this value proposition (although not for Apple, of course). But try to imagine what the U.S. might have accomplished if it spent $39 billion on NASA in 2013. Or, heaven forefend, $39 billion in salary increases for teachers.

What we would be talking about in both cases is a massive paradigm shift in favor of those who are shaping the future. That may not be very entertaining, but it would surely be transformational.

Now, before you sports fans out there start flaming me with emails about the value of sports, and what an elitist idiot I must be, let me confess that I, too, am a sports fan. I have followed the exploits of my Denver Broncos throughout this NFL season with loud cheers and great delight. (As I write this we have three weeks to go in the regular season, and we clinched a playoff spot last night by proving that Peyton Manning cannot play in the cold, as he only passed for 397 yards, four touchdowns and zero interceptions in Denver’s 51-28 stomping of Tennessee in 15-degree temperatures.) I understand and appreciate that in programs where sportsmanship comes ahead of money, young people can learn the values of teamwork, collective effort, study of the opposition, loyalty, hard work and sportsmanship.

There is no question that sport has value to our society. My issue is with valuing those who amuse and entertain us with $100-million-plus contracts, while valuing those who shape the future in our schools at only about 1/2,000th of that.

Here at the Space Foundation, we’ve been grappling with these challenges for more than 25 years.  We’re painfully aware that government funding for education grants to organizations like ours have all but gone the way of the dodo. We know that grants from philanthropic foundations have also dwindled: in a complex evolution of the private foundation grant-making business, many endowments have dwindled as a result of recent economic crises, and many private foundations have responded by bringing their programs “in house” — at least in part to preserve their own staffing. The vast majority of private philanthropy toward 501(C)3 non-profits like ours now originates with private individuals — a constituency with whom we have little past experience.

That’s why you’ll see us placing a greater and greater emphasis in 2014 on our education mission, and on identifying champions and supporters to help fuel that mission.

The View from Here is that the greatest threat to our space industry — around the country and around the world — is the continuing decline in STEM education. 2014 needs to be the year in which we get our priorities right. We invite you to join us in our mission, and respectfully request your increased financial support (to make a donation now, visit: www.spacefoundation.org/donate).

Wishing you all a healthy, happy, prosperous 2014, filled with success, generosity and Aloha,