There are five international treaties underpinning space law, overseen by the United Nations Committee on the Peaceful Uses of Outer Space (UNCOPUOS). 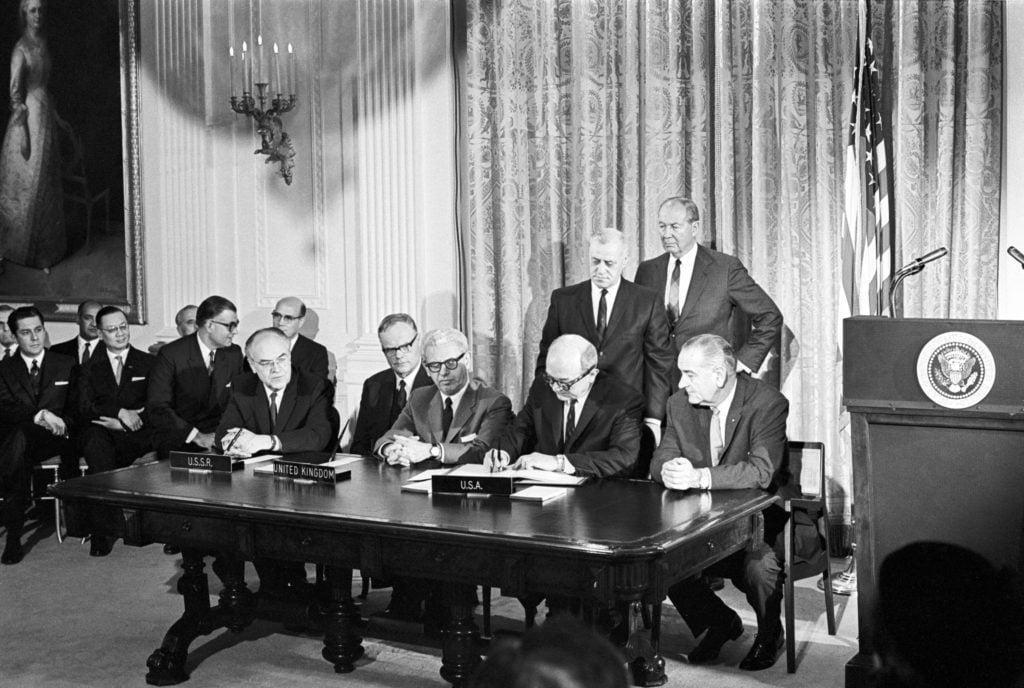 The signing of the Outer Space Treaty in 1967. Credit: United Nations

“Treaty on Principles Governing the Activities of States in the Exploration and Use of Outer Space, including the Moon and Other Celestial Bodies”

The treaty is the foundation of international space law for signatory nations (108 in 2019). The treaty presents principles for space exploration and operation:

“The Agreement on the Rescue of Astronauts, the Return of Astronauts and the Return of Objects Launched into Outer Space”
Signatories agree to take all possible actions to help or rescue astronauts in need, and if applicable, return them to the nation from which they launched. Additionally, signatories agree to help return to the sponsoring nation any space objects that land on Earth outside of the country from which they were launched.

“The Agreement Governing the Activities of States on the Moon and Other Celestial Bodies”
The Agreement states that celestial bodies can only be used for peaceful purposes, that they should not be contaminated, that the UN should always be made aware of any station on a non-Earth body, and that if resource mining on the Moon becomes feasible, an international regime must be established to govern how those resources are obtained and used. The United States is not a signatory of the Moon Agreement.

“The Convention on International Liability for Damage Caused by Space Objects”
Signatories take full liability for any damage caused by their space objects and agree to standard procedures for adjudicating damage claims.

“The Convention on Registration of Objects Launched into Outer Space”
Expanding a space object register, the Convention empowers the UN Secretary-General to maintain a register of all space objects.

« Components of a Satellite