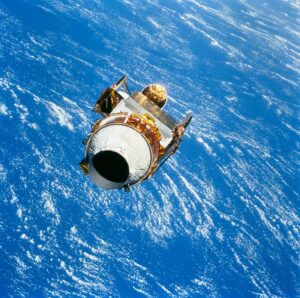 Launched in 1993, the satellite uses advanced on-board switching and processing technology that permit on-demand allocation of satellite channels and reuse of bandwidth. ACTS also features significant capacity gain through the use of special antenna systems, which generate message-carrying spot beams, each focused on a narrow Earth region as opposed to the broad beams generated by earlier satellites. These and other ACTS technologies combine to offer potential for significant cost reductions that would make practicable such new services as remote medical imaging diagnostics, global personal communications, direct transmission of image data to battlefield commanders, and interconnection of distantly-located supercomputers.

To transfer the new technology, NASA implemented a partnership program with one hundred partners from industry, government, and academia. Several telecommunications firms have incorporated specific technologies into their satellite systems, including Motorola Iridium Global Personal Communication System and Hughes Space & Communications. The ACTS antenna design has been commercially transferred into a land-mobile satellite antenna system that will enable direct broadcast satellite television aboard moving vehicles. The ACTS design has enabled these mobile satellite antennas to remain pointed at the transmitting satellite regardless of the motion of the vehicle on which it is mounted. Future applications could include use in broadcasting, emergency medical and military vehicles.