COLORADO SPRINGS, Colo.  (Oct. 10, 2013) – It seems fitting that on the final day of the global celebration of World Space Week, the world says goodbye to NASA astronaut M. Scott Carpenter, who died in Denver today at the age of 88. 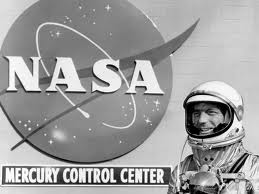 Born in Boulder, Colo., in 1925, Carpenter was one of the original seven Mercury astronauts selected by NASA in 1959, the second American to orbit the Earth and the fourth American in space. Carpenter retired from the Navy in 1969 with the rank of commander, and pursued his interest in oceanography.

“Scott Carpenter’s star always burned bright, and the space community’s sky is dimmer for his loss,” said Elliot Pulham, chief executive officer of the Space Foundation. “Scott would be the first to say that it is long past time to create some new heroes, and the best way to honor his legacy is to press on with the exploration of space – to the Moon, Mars and beyond.”

In 1965, Carpenter broke the record of human underwater habitation by spending 30 days in SEALAB II, an experimental underwater habitat developed by the United States Navy and used, among other purposes, to prove the ability of humans to live in isolation for extended periods of time. The Space Foundation acquired the Scott Carpenter Station in 2012, and it is currently on display at the Space Foundation Discovery Center, the region’s first and only space, science and technology attraction, located at 4425 Arrowswest Drive, Colorado Springs, Colo.

About the Space Foundation
Founded in 1983, the Space Foundation is the foremost advocate for all sectors of space, and is a global, nonprofit leader in space awareness activities, educational programs and major industry events, including the annual Space Symposium, all in support of its mission “to advance space-related endeavors to inspire, enable and propel humanity.” Space Foundation world headquarters in Colorado Springs, Colo., features a public Discovery Center including the El Pomar Space Gallery and the Northrop Grumman Science Center featuring Science On a Sphere®, and is a member of the American Alliance of Museums. The Space Foundation has a field office in Houston, and from its Washington, D.C., office, conducts government affairs, publishes The Space Report: The Authoritative Guide to Global Space Activity and provides three indexes that track daily U.S. stock market performance of the space industry. Through its Space Certification™ and Space Technology Hall of Fame® programs, the Space Foundation recognizes space-based technologies and innovations that have been adapted to improve life on Earth. Visit www.SpaceFoundation.org, follow us on Facebook, LinkedIn and Twitter, and read our e-newsletter Space Watch.