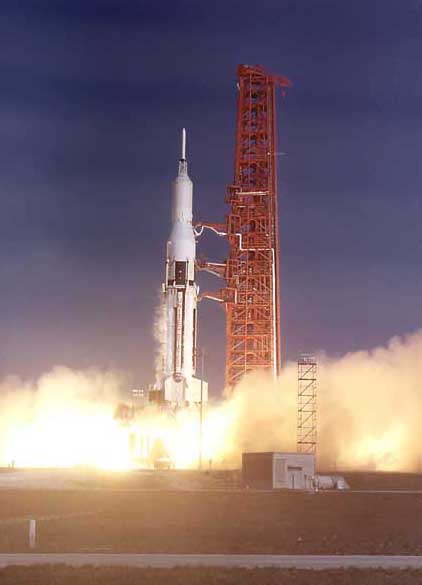 On Feb. 16, 1965, NASA successfully conducted the third test flight of the Apollo Saturn launch vehicle program, with the launch of a two stage Saturn-I rocket carrying simulated Apollo command module, service module and launch escape systems. Also on board was the first Pegasus micrometeoroid detection satellite. Of the 12 mission objectives for Apollo flight SA-9, two were concerned with Pegasus and the remainder with the Saturn and Apollo systems that would later be used to put men on the Moon.

Apollo SA-9 launched from Cape Kennedy Launch Complex 37B at 9:37 a.m. EST. As part of the mission test program, the launch escape system was successfully jettisoned during ascent, and the command module was separated after it achieved orbit. The Pegasus satellite, with a 96-foot (29.3 meters) wingspan, was successfully inserted into a low Earth orbit — Perigee 310 nautical miles (500 km), Apogee 457 miles (736 km) — where it observed meteoroid phenomena for three years, six months, and 13 days. Pegasus remained in space until July 10, 1985, when it re-entered the atmosphere and fell into the ocean.