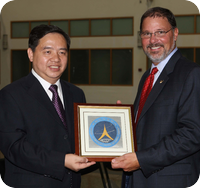 You cannot open a book without learning something – Confucius

If there’s a place in the world that we Americans still have much to learn about, it is China. As I write this column, I have just returned from leading a small delegation of U.S. space executives on a one-week mission to tour China’s manned spaceflight facilities and to meet with leaders of China’s human spaceflight program. During our visit, our Chinese colleagues made an “open book” of these facilities – many of which have never been seen by Westerners before.

This was, frankly, one of the most open and transparent visits to any space facility I can remember. Unlike the many visits I’ve made to American and European space centers (both civilian and military), we were allowed to go anywhere we wished, see anything we wished, and ask any questions we had.

We learned a lot, and not just from seeing these facilities for ourselves. Over the course of the week we enjoyed many long conversations, formally and informally. We had the opportunity to visit a few significant cultural sites, and several opportunities to venture out on our own and “meet the locals.” We were deeply impressed with the candor, friendliness, and optimism with which we were received everywhere we went.

Our visit began in Beijing, where we toured the ancient Forbidden City and the modern 2008 Olympic Games venues before settling into a full schedule of meetings and site inspections. At “Space City” on the outskirts of Beijing, we visited several sites at the China Academy of Space Technology (CAST) – including “Mission Control” (the Beijing Aerospace Control Center) and the production facilities where the Shenzhou 8 spacecraft, TANG-1 spacecraft, and various satellites are in assembly. We were greeted by China’s first astronaut, Yang Liwei, and China’s first astronaut to perform a spacewalk (EVA), Zhai Zhigang, and were allowed to explore numerous labs and training facilities at the China Astronaut Research and Training Center.

But Beijing was just the start. After a four-hour jet trip on Shanghai Air, we found ourselves in the ancient fortress city of Jiayuguan. After a tour of the Jiayuguan Fort, the Great Wall, and the city itself, we were up early the next day for the 400 kilometer drive across the Gobi desert to the Jiuquan Satellite Launch Center. We were briefed at the launch control center, and then toured the vehicle assembly building and launch pad for the Shenzhou manned missions and other sites.

I won’t go into detail about everything we saw. AVIATION WEEK & SPACE TECHNOLOGY reporter Frank Morring, Jr., accompanied us on this mission and will publish a detailed account, complete with photos. (An abbreviated, on-line report has already been published; to read it, click here.) Rather, I’d like to offer some broad observations that I took away from our remarkable week in China.

First, prosperity looks awfully good. Everywhere you go in Beijing, there is a kind of electricity in the air as China’s economy continues to blossom. It has come out of the global downturn quickly, reduced its dependence on exports, and continues to grow and draw investment from all over the world as companies seek, and are granted, access to the largest consumer market on the planet. This air of prosperity translates in countless ways, tangible and intangible, and it is not limited to Beijing. If there is one word for what fuels this prosperity, it is “partnerships.” China is embracing and teaming with partners from all over the world in every manner of endeavor. Only the U.S. seems to struggle with embracing this new paradigm. There is a fundamental optimism here that things are better and getting better all the time.

Second, the Chinese people seem remarkably pro-American. More than one conversation started with “we will never forget how the U.S. came to China’s aid in 1945.” Many of our hosts had strong connections to the U.S.; for example, having studied at an American university or having a child currently living and studying in our country. Whether playing bar games with steel workers in Jiayuguan’s night market, or meeting people out-on-the-town in Jiuquan, we were greeted warmly and shown great hospitality everywhere we went.

Third, the Chinese are remarkably frank about the pros and cons of their government and the relative merits of past decisions.

Fourth, there is a genuine desire among the leadership of China’s space community to forge a strong partnership with the U.S. space community. China has great space industrial capacity and capability (employment at the CAST alone is more than 130,000), but still looks to the U.S. as the leader in space. Recognizing, as we have, that the exploration and development of space is too costly an enterprise for any nation to go it alone, China is anxious to partner with the U.S. and its international partners in the full range of civil space activities. They are willing to do so in remarkably transparent fashion. Commercial partnerships are also of high interest.

Finally, the Chinese seem more like us than most people would imagine. They are outgoing, down-to-earth, ready to share their favorite restaurant or tavern, and make friends easily. Even Chinese television seems more like American TV than European programming does (and the Chinese pop music scene is unabashedly inspired and influenced by American rock and pop). They grapple with many of the same issues (the issue of texting from handheld devices while driving was a hot topic while we were there). Most of the members of our delegation remarked upon how surprisingly comfortable and “at home” they felt in China.

The View from Here is that the U.S. has much to gain from improved relationships with China, and that the key to nurturing a useful partnership going forward will be engagement. The Space Foundation is pleased to play a role in helping bridge the current gap between U.S. and Chinese space interests, and looks forward to warm and constructive friendships with our colleagues in China for many years to come.