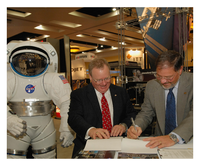 The Space Foundation and NASA have signed an agreement to formalize their long-standing collaboration on building awareness of the tangible benefits of space exploration.

“Building better awareness and support for space is a key component of the Space Foundation mission to advance space-related endeavors to inspire, enable, and propel humanity‘” said Kevin Cook, director of the Space Foundation’s awareness programs. “This agreement formalizes and gives extra weight to the work that we have been doing with NASA for years.”

The agreement spells out three objectives:

This includes using the Space Technology Hall of Fame®, the NASA Spinoff publication, the Space Certification Program, and both Space Foundation and NASA education programs, all of which identify and communicate the benefits of space-derived technology used on Earth and to disseminate, as widely as possible, knowledge of the important contributions space makes to Earth’s economic base through private-public collaboration on innovative technologies.

Recent examples of this collaboration are the induction of EagleEyes Optics protective lenses and digital fly-by-wire technology into the Space Technology Hall of Fame® and NASA’s announcement of its OPTIMUS PRIME Contest, in which students identify leading spinoff technology benefits. Both occurred during the 26th National Space Symposium.