The View From Here: Looking Up 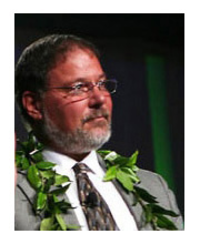 Honomu, Hawai’i – The views of the night sky are spectacular from this sleepy little village at the foot of Mauna Kea. Armed with nothing more than the naked eye and my handy mobile Google Skies app, I can easily pick out the constellations Hercules, Lyra, Scorpio, Libra, Ursa Major, Ursa Minor, Gemini and Orion – among others. Major stars visible include Alderamin, Etamin, Vega, Rasalhague, Antares, Alkaid, Merak, and of course, the most steered-by stars in these waters, Polaris and Hokulea (Arcturus).

But despite my little hand-held Android wonder, I see nothing in comparison to the scientists working with the telescopes atop the great mountain. A dozen major telescopes dot the peak, ranging from the 0.9 meter University of Hawai’i-Hilo educational telescope, to the 20 meter Keck array and the 25 meter very long baseline array radio telescope. A fascinating melting pot of players stargaze here, from space agencies like NASA (NASA infrared telescope facility), to universities (Cal Tech’s Keck and Submillimeter observatories and various University of Hawai’i related ‘scopes), to non-profit organizations like the Smithsonian and National Science Foundation. There are national observatories including the United Kingdom Infrared telescope or Japan’s Subaru telescope and multinational observatories including the James Clerk Maxwell Telescope of the UK, Canada and Netherlands or the Gemini Northern Telescope of the U.S., UK, Canada, Argentina, Australia, Brazil and Chile.

Of course, the addition of the multi-national Thirty Meter Telescope is much anticipated, and looking northwest from Honomu, across the ‘Alenuihāhā Channel, Haleakalā and the half-dozen or so telescopes of the Air Force Maui Optical Station (AMOS) loom large over Maui.

Everyone here, it seems, is looking up.

This is nothing new in Polynesia. Some 1,500 years before Europeans sailed west across the Atlantic and inexorably ran into the massive North American continent, Polynesians were navigating with pinpoint precision among tiny islands scattered across the vast Pacific Ocean – 46 percent of the world’s water surface. In stark contrast to the technologic wonders atop Mauna Kea and Haleakalā, petroglyphic representations of the constellations and stars can be found carved into the lava where Hawai’ian coastal villages once thrived.

At about the same time, the Sumerians had identified at least Venus and, shortly afterwards, Mercury, Mars, Jupiter and Saturn were all identified by Babylonian astronomers. And Neolithic sites like Stonehenge, Avebury and West Kennett would seem to support the theory that even our Stone Age forebears had some knowledge about the workings of the cosmos.

All of which makes me optimistic that, in the long run, humans will continue to explore the universe – with telescopes, robots and with the greatest exploration system ever invented – humans themselves. What is less clear is how, and when, the great adventure will unfold.

Lockheed Martin executive Jim Crocker, speaking at a space conference in Denver, riveted the audience with this observation: Throughout the 50 years that humans have been in space, there have been two nations capable of putting them there. By the end of 2011, there will still be just two nations capable of putting people into space – but the U.S. won’t be one of them.

For me, and, I would suspect, for most baby boomers, this is staggeringly inconceivable. To paraphrase my favorite comedian, Lewis Black, it is as if the reason we did all those drugs back in the 60’s was just to prepare us for this surreal, unbelievable moment in time (expletives deleted).

So what has changed? How can we have gone from the fastest and most ambitious space program in the world to one that appears so lethargic?

From the time that President John F. Kennedy gave his famous speech at Rice University until Apollo 11 landed on the Moon just seven years, ten months and eight days elapsed. In contrast, the James Webb Space Telescope became the nation’s top-ranked most important space astronomy program in 2000 – and almost 11 years later the earliest launch date forecast by the JWST Independent Comprehensive Review Panel is September of 2015.

NASA froze the configuration for its never-before-attempted Lunar Excursion Module in April of 1963. Four years and ten months later, the first operational LEM flew on Apollo 5. Again by contrast, the U.S. Air Force kicked off its Evolved Expendable Launch Vehicle (EELV) program in 1994; largely based upon existing systems (Delta and Atlas even retained their names), EELV took nearly twice as long – eight years – before its first flight in 2002.

While one could make comparisons like this ad infinitum, it really wouldn’t be completely fair. One can find plenty of examples to make the case that the U.S. still has the “Right Stuff” when it comes to space exploration:

And if you really want to see what the U.S. is capable of in space exploration, look no further than SpaceX and Orbital Sciences. As 2010 came to a close, SpaceX successfully launched its internally developed Dragon crew and cargo capsule aboard an internally developed Falcon 9 launch vehicle, becoming the first private company to design, develop, launch, orbit, re-enter and recover a spacecraft – something only nations have done heretofore. Orbital is not far behind with its Cygnus program. Both programs are moving very, very swiftly.

So, back to the question, what has changed? How can the U.S., of all countries, end up without a national means of putting people in space?

The first temptation is to just say “money.” NASA got roughly 4 percent of the federal budget during the heyday of Apollo, but today receives about one half of 1 percent. Certainly, when you’re feeding your programs a starvation diet, they cannot move at the speed of yore. I’ve written on this subject, and the Space Foundation’s “One Percent Solution” many times.

But clearly the issue is more complex. At the top level, however, I think a case could be made for two overarching causes:

1. The crisis in American values.

2. The crisis in American education.

Perhaps I’m just being nostalgic, but it seems to me that the American values that supported innovation, investment, risk-taking, teamwork, enterprise and pride in national accomplishment have eroded significantly in my lifetime.

Maybe it is a misperception fostered by the evolution (if you can call it that) from a society of principled journalism to one of profit-driven, often histrionic, media. Further, I can’t imagine Enron, Tyco, the S&L collapse, the dot.com bubble, the mortgage bubble or the collapse of the banking and investment system happening in the 60’s. The legacy of investing in a better future for our children seems to have been battered by greed, entitlement, and the tyranny of short-term profit taking. Public discourse has become coarse and divisive, and the financial rewards of litigiousness have had a chilling effect on risk-taking. Generation X was the first generation of Americans to have been statistically proved to be worse off, based on earnings and quality of life, than their parents.

I believe our failing education system also plays a much larger role than we generally recognize, and it goes beyond the science, technology, engineering and mathematics (STEM) challenges that we tend to focus on in our industry. Politically motivated standardized testing is driving creativity and critical thinking skills out of the K-12 classroom. An OECD study of the 36 most developed countries in the world ranked the U.S. 18th. And our high school dropout rate is staggering: only 75 percent of American high school students graduate. With 25 percent of the high school population unable to graduate, is it any wonder that our collective national IQ sometimes seems to be suffering?

It’s a bleak scenario. Will history record that in the space race, the U.S. won the short sprint to the Moon, but failed to finish in the marathon of exploring the universe?

Despite a bad case of explorus interuptus at NASA, I remain optimistic over the long term. I have had the privilege of working with many U.S. space companies during my career, and the passion for space exploration has never waned. While exciting new players like SpaceX are creating a huge buzz in our industry today, the established giants like Boeing and Lockheed Martin have long traditions of “betting the company” on new products and technologies. Perhaps uniquely, space professionals take pride even in the accomplishments of their competitors – somehow understanding that every successful launch of a new launch vehicle, every landing of a robot on another planet, ultimately advances human understanding and the human condition.

I’m also very encouraged by what I see of Generation Y (or, the Millenials). Studies indicate that our current generation of youth tends to embrace free market principles and responsible social behavior (i.e. abstinence from drug experimentation, underage drinking and premarital sex). According to Wikipedia, “The rise of instant communication technologies made possible through use of the internet, such as email, texting, and IM and new media used through websites like YouTube and social networking sites like Facebook, MySpace and Twitter, may explain the Millennials’ reputation for being somewhat peer-oriented due to easier facilitation of communication through technology. Expression and acceptance has been highly important to this generation. In China, the urge to stand out and be individualistic has become a staple of the Chinese youth culture.”

Prize-winning author Kurt Andersen, in his book Reset: How This Crisis Can Restore Our Values and Renew America, makes a strong case that if Millennials can “keep their sense of entitlement in check, they might just turn out to be the next Greatest Generation.”

The View from Here is that human beings will always Look Up, and the United States will always play a leading role. Embracing the many other nations that have joined us on this journey can only make us stronger. And the greatest age of exploration, and our greatest “greatest generation,” are yet to come.