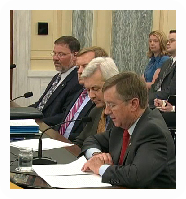 Space Foundation Chief Executive Officer Elliot Pulham testified May 18 before the U.S. Senate Committee on Commerce, Science, and Transportation on the importance of a robust space program (the official topic of the hearing was The Contributions of Space to National Imperatives).

Key quotes from the hearing include:

U.S. Senate Committee on Commerce, Science, and Transportation Chairman John D. (Jay) Rockefeller IV:  America’s space exploration has meant much more than just going to space. The technology we’ve developed to get there has led to new innovations, new breakthroughs and new discoveries. And this has helped make America prosperous, inspired future generations of scientists and engineers and boosted our economy. It is critical that we maintain our space leadership. Last year, we drafted and passed legislation that laid out a carefully considered bipartisan vision of the best path forward for NASA. It was a vision that enabled ambitious investments in science, aeronautics, education and human space flight exploration, while also recognizing current budgetary constraints. More than seven months after President Obama signed this bill into law, I am concerned NASA is not moving forward with implementing it with the urgency it requires. I’m worried that NASA’s inaction and indecision in making this transition could hurt America’s space leadership – something that would cost us billions of dollars and years to repair.

U.S. Senate Subcommittee on Science and Space Chairman Senator Bill Nelson (D-Fla.): Our space program has produced tens of thousands of scientists, mathematicians and engineers, while also helping to make our nation one of the most advanced and powerful in history. It has created numerous new companies and tens of thousands of jobs for skilled workers. At the same time it has dramatically improved the quality of life for millions here on Earth. That’s why we must push forward to keep America at the forefront of an undertaking that benefits all of humanity.

Pulham: The exploration, development and use of space really does inspire our nation and the world, enable us to dare greatly and achieve our goals and propel us confidently into the future. Space products and services are an integral part of daily life, expanding each year into new areas of human activity. Over the past six years, the global space economy has grown by 48 percent – from $164 billion in 2004 to $276 billion in 2010. But global space employment has been stable over the past couple of years, with job increases in Japan, India, Germany and other nations offsetting job losses in the United States. Doing the hard things requires our best and brightest minds. Developing this intellectual capacity requires inspiring, challenging and exciting work to do. When America has made that investment, we have never failed to achieve our capacity for greatness.

Slazer: Space programs are essential to our national, technological and economic security. U.S.-developed space technology and its many spin-offs have fueled our economy and made us the unquestioned technological leader in the world for two generations. The future of U.S. space investments are threatened due to our constrained fiscal environment. While cutting the federal deficit is essential to assuring our economic future, cutting back on exploration investments is a penny-wise but pound-foolish approach that will have an infinitesimal impact on the budget deficit. Cutting exploration any further threatens our economic growth potential and risks our continued national technical leadership overall – even as emerging world powers increase their investments in this important arena.

Chyba: Sending humans beyond low-Earth orbit (LEO) has as its fundamental goal charting a path for human expansion into the solar system. This is ambitious, but if this is not our goal, we’d best just restrict ourselves to destinations in LEO. Human expansion into the solar system is a goal worthy of a great nation working in concert with other space powers. Choosing this as our long-term goal, while trying to maximize spaceflight’s contributions to all areas of society as we proceed, provides the context for making decisions about our next steps. And it also embraces the ISS as a means to an end rather than a destination that we’ve left behind.

Culbertson: NASA contributes to economic growth through the thousands of jobs and hundreds of new industries created as a direct result of NASA innovation. Thus far, NASA has documented more than 1,500 spin-off success stories related to health and medicine, transportation, public safety, consumer goods, environmental and agricultural resources, computer technology and industrial productivity. A discussion of NASA’s contributions to national imperatives must include the subject of which nation will be first among nations in leading peaceful human and robotic exploration of the solar system while learning how to live and travel more safely and efficiently here on Earth. It is not a foregone conclusion that the United States will remain the preeminent spacefaring nation, and will reap the benefits of leading the march of progress beyond low-Earth orbit.

In this month’s The View From Here, Pulham discusses his main themes. To see Pulham’s full prepared statement, click here.  To see the hearing on C-SPAN, click here.