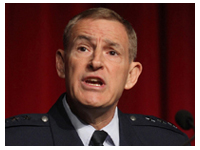 Like the 2011 Cyber 1.1 conference, Cyber 1.2 will reveal senior leadership views on Department of Defense and industry cyber activities, with emphasis on hot button issues, human capital development, international dimensions and the evolving challenges posed by cyberspace.

Dynamic Program
Cyber 1.2 will feature speakers from industry and government, and panel discussions, including:

Look for updates on speakers and panelists at www.NationalSpaceSymposium.org/agenda/monday-april-16-2012.

To Register
For information about package pricing, military rates and secure online registration for both Cyber 1.2 and the 28th National Space Symposium, go to www.NationalSpaceSymposium.org/register, which includes a live chat tab for customer service questions.

About Basla
Basla is vice commander, Air Force Space Command, Peterson Air Force Base, Colo. He assists the commander in organizing, equipping, training and maintaining mission-ready space and cyberspace forces and capabilities for the North American Aerospace Defense Command, United States Strategic Command and other combatant commands around the world.

What is Cyberspace?
From a military perspective, cyberspace is a domain for both strategic and tactical operations characterized by the use of electronics and the electromagnetic spectrum to store, modify and exchange data via networked systems and associated physical infrastructures. The term cyberspace was coined by the science fiction author William Gibson in his 1982 story “Burning Chrome” and popularized by his 1984 novel Neuromancer.