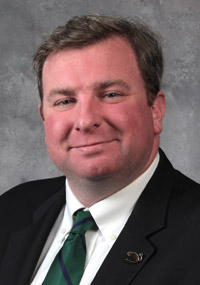 Space Watch now includes a monthly feature, called Second View, that shares a viewpoint from a Space Foundation team member. The column complements The View From Here and expands our ability to share Space Foundation views and issues. This column is by Brendan Curry, vice president – Washington operations.

As I compose this, the Space Foundation’s Research and Analysis team is hard at work on the 2012 edition of The Space Report: the Authoritative Guide to Global Space Activity. It will be released in April just before the 28th National Space Symposium and will be a thorough review of all things space-related that took place in 2011. From retirement of the venerable Space Shuttle fleet to the first Soyuz launch from French Guiana to the operations of the Chinese Tiangong-1 prototype orbital lab to the discovery of ice on Mercury and to almost monthly discoveries of new, mysterious exo-planets light years beyond our solar system, a lot happened in 2011.

We can report to you there were 84 launches in total (with payload mass delivered to orbit estimated at approximately 310 metric tons). This launch rate is up from 74 the previous year. 2011 was definitely an active year for space.

2012 is still brand new and what will unfold this year is, I think for many of us, tumult and uncertainty. As a person who works in the policy world in Washington, D.C., first and foremost in my mind is that this is an election year. Not only is President Obama up for re-election, but the entire House of Representatives and one-third of the Senate are reapplying for their jobs. No one can foretell how things will play out in early November as Americans head to the polls, but I can tell you that the never-ending campaigning will have a chilling effect on any chance of major substantive policy changes taking place. I can also tell you to expect battles to be fought over proposed spending cuts.

While the sturm und drang of American politics plays out on the Hill, across the nation and relentlessly on every known form of media, space professionals, both here in America and abroad, will continue to quietly keep on working to explore the cosmos and unlock its mysteries.

I’d like to touch a bit more on that point. We seem gripped by a feeling that now is not the time to think too far ahead. Things are too turbulent. It’s too risky to plan too far out. We get bogged down by the quicksand that is the minutia of day-to-day life. I’d like to gently suggest that now is a perfect time to start thinking ahead and more importantly, to dream.

One of my favorite writers and a key pillar of modern science fiction (which is a genre I would argue was started by Mary Shelley with Frankenstein in 1818) is the great French writer, Jules Verne. Verne’s writing career really did not get productive and pick up steam (if you’ll indulge the pun) until after 1848.

Those who are familiar with European history will note that 1848 was the historic year that rocked Europe with revolutionary fervor and set the course for the remainder of the 19th century. In that time, the world saw the creation of modern Italy, Germany and the Austro-Hungarian Empire. During this era of tumult and uncertainty the world witnessed the Industrial Revolution, the mass migration of people from farms to cities and the rise of unions. It was also a time of such privation in parts of Europe that tens of millions of people took their chances, risked what little they had left and traveled the Atlantic hoping for a better life in America. It was during this time that grievances, both great and small, were allowed to fester and thus set the stage for the cataclysm that became World War I.

Please note, it was during all this that Jules Verne wrote his science fiction masterpieces. Works that were not magical fantasy tales, but works that incorporated known science and mathematical models to show that concepts that were once only dreams could actually work. They almost all had a quite sunny, hopeful and optimistic disposition, as well. If you have not read From the Earth to the Moon, please do. There are some eerie similarities to Verne’s manned moon mission and the Apollo mission architectures.

As I conclude, I also beseech. I urge you not to stop dreaming. We in this business are damn lucky to be in it. Most of us have not just “fallen into it” like most other terrestrial careers. I’ll wager most of us are here because we believe human expansion into the heavens is practically an article of faith. While it is easy to get morose and downtrodden about some of what we see on the landscape, I remind you to step outside tonight and simply look up.

About Curry
As the Space Foundation’s Vice President – Washington Operations, Brendan Curry leads the Space Foundation’s government affairs efforts based in Washington, D.C., serving as principal interface with key customers, staff, and officials in the administration, Congress, space industry, and federal agencies including the Departments of Defense, Commerce, State, Education, Transportation, and NASA. He is also responsible for the Space Foundation’s Research & Analysis functions, including policy analysis, Space Foundation Indexes, White Papers and special reports, and the Space Foundation’s annual analysis and report on the state of the space industry, The Space Report: The Authoritative Guide to Global Space Activity. Previously, Curry was the senior legislative assistant to Congressman Dave Weldon, M.D. He earned a Bachelor of Arts degree in history from the University of Scranton and Juris Doctor of Law degree from Pennsylvania State University, Dickinson School of Law.