The View From Here: Barbarians at the Gates 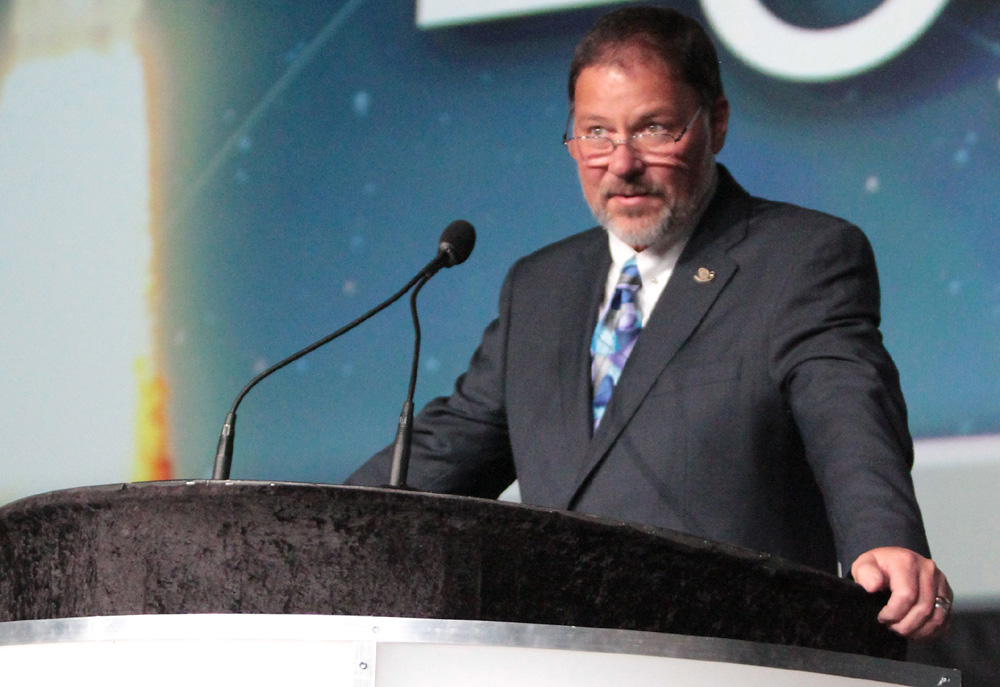 Growing up in a ranch family, I heard plenty of cowboy wisdom about “closing the gates after the horses have all run off.” So I naturally tend to think about U.S. “protection” of space technologies in similar terms.

Imagine a fenced-in pasture where our space technologies are grazing. The front gate is labeled “Exports,” is slammed shut and is guarded by throngs of taunting, saber rattling guards. But if you look closely, another gate, labeled “Universities,” is standing wide open. Our grazing technologies meander in and out of this gate, mingling with students, researchers, scientists and others from virtually every nation on the planet.

I think the visual is very apt, and there’s a lot of instructive fun you can have with it.

One of the first things a really wise, old cowboy would say is that we never used to have to worry about the corral in the first place. Heck, we were so busy driving our space programs across the range at high speed nobody could keep up with us. By the time they figured out where the herd was, we had all moved on. The herd was moving fast, and growing all the time.

Not exactly where the U.S. space program is today.

The reason these images pop into my head is that it appears, at long last, that the U.S. is ready to replace the throngs of guards at the ITAR entrance with a more reasonable gatekeeping system – we hope. The “1248” export control findings announced by Ambassador Greg Schulte during the 28th National Space Symposium were hardly surprising, but the fact that the Ambassador is finally in the position to talk about them is major progress. Good people in the Congress, administration and industry are all trying to prop that gate open a bit, so that reasonable commerce can once again commence.

This is nothing more than enlightened self-interest, as export controls have seriously injured the U.S. space industrial base, while creating global market opportunities for other nations. The American government, simply, is finally recognizing the increased costs and reduced purchasing power that comes along with a constrained domestic industrial base.

As the country works through the enabling legislation and the processes by which space exports are controlled, it will be kicking the export gates open a bit. How much? As wide as possible, I hope. We need to adjust the Export gate in full consideration of just how far open the Universities gate stands. It does no good to constrain commerce in space technologies that are already freely flowing through the open portals of academia.

Because many of the “gate guards” in this area foot-stomp and bombast their concerns about China, it is appropriate to examine our internal inconsistencies. While the exports gate remains closed to China – indeed many gatekeepers continue to pile more and more anti-China locks upon the entrance – the academic gates happily flap open, wider and wider.

According to the Council of Graduate Schools, a half million applications for the autumn 2012 term have been sent to U.S. graduate schools by foreign students. Applications from China rose 20 percent in 2010, another 21 percent in 2011, and jumped another 18 percent this year. China is the single largest country of origin for international graduate students coming to study and perform university research in the United States, and the fastest growing.

By most counts there are 723,277 foreign students enrolled in American universities, of which some 157,558 – or 22 percent – are Chinese. And while the number of Chinese students that we are educating at the graduate level is increasing at about 20 percent per year (per the above data), at the undergraduate level Chinese enrollment in U.S. colleges increased about 43 percent last year.

And it is instructive to look at some of our more technically focused schools. The University of Virginia has seen its international enrollment increase 44 percent, with China being the single largest nation of origin. The University of Southern California is a perennial favorite of non-U.S. students, with nearly 9,000 enrolled. The Ohio State University, with more than 10,000 graduate students, has opened a gateway office in Shanghai in order to keep up with applications from China, which have increased 29 percent.

By the way, these are not bad things.

International students spent about $21 billion in the U.S. on tuition, fees and living expenses last year. Given the decreases in funding for U.S. higher education, at both the federal and state levels, international students paying disproportionally higher non-resident tuition are helping to prop up a higher education system that has been the victim of benign neglect from elected and appointed officials. Until America, as a nation, is ready to make education a priority again, our colleges and universities must find ways to keep their doors open and international scholars are forming an increasingly important part of that calculus.

Foreign students also must, to succeed, learn something about American culture and society while they are here. And they expose our own young people to the cultures and societies of the world. This peaceful development of friendships without borders has long been a prominent feature of secondary education, and is, perhaps, the most effective antibody our society has to inoculate us against the perils of sensational, isolationist political ranting. (Back, full circle, to those “barbarians at the gate.”) In fact, no less an iconic institution than the U.S. Air Force Academy fully understands the benefits of engaging internationally through student programs: included in this year’s graduating class are 50 cadets representing some 36 partner nations.

The problem isn’t with this robust international engagement at the university level. The problem is with export control policies that ignore it, and instead place onerous gatekeeping burdens upon industry.

The problem isn’t with colleges, universities or other organizations that are willing to engage in constructive, informal, unofficial relationships with other nations. It is with elected or appointed government that is not willing to do this.

As another famous cowboy once said, “The enemy is within the gates. It is with our own luxury, our own folly…that we have to contend.” (Marcus Tullius Cicero*)

The View From Here is that the 1248 report (mandated by Section 1248 of the National Defense Authorization Act for 2010) and subsequent proposed legislation finally put us in the position to get our space technology gatekeeping right. Removing space technologies from the munitions list is a good first step. Subsequent steps must recognize and protect only those technologies that really need protecting, while encouraging industry to trade freely wherever academia and non-U.S. industry are already free to do so.

*Although best known as one of Rome’s greatest orators, Cicero came from the Equestrian class, which provided horses and cavalrymen to the Roman army.