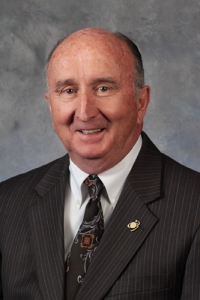 Zimkas has been with the Space Foundation since 1986, following a 26-year Air Force career, during which he was selected as one of the Twelve Outstanding Airmen of the Year for the United States Air Force, as senior enlisted advisor for NORAD and as the first Air Force Space Command senior enlisted advisor. After Zimkas’ Air Force retirement, Air Force Space Command dedicated its Enlisted Heritage Room in his honor. Zimkas is active in national, regional and community activities, including serving as a member of the Rocky Mountain Chapter of National Defense Industrial Association (NDIA), the Lance P. Sijan Chapter of the Air Force Association (AFA) and as vice president of the Arrowswest Owners Association Board. He is an Emeritus Member of the AFA National Board of Directors.

“We’re pleased to be able to recognize the extraordinary accomplishments of Chuck Zimkas over more than 25 years with the Space Foundation,” said Pulham.  “Chuck’s leadership has been instrumental in assuring mission success during recent years of dramatic growth at our organization.”

In his new position, Zimkas continues to be responsible for operations, customer service, facilities, human resources, event planning, information technology, logistics and operation of the new Space Foundation Visitors Center. In addition, both the Space Foundation’s education enterprise and its marketing and communications group now report to Zimkas.

About the Space Foundation
The foremost advocate for all sectors of the space industry and an expert in all aspects of space, the Space Foundation is a global, nonprofit leader in space awareness activities, educational programs that bring space into the classroom and major industry events, including the National Space Symposium, all in support of its mission “to advance space-related endeavors to inspire, enable and propel humanity.” The Space Foundation publishes The Space Report: The Authoritative Guide to Global Space Activity and provides three indexes that track daily performance of the space industry. Through its Space Certification and Space Technology Hall of Fame® programs, the Space Foundation recognizes space-based technologies and innovations that have been adapted to improve life on Earth. Founded in 1983, its Colorado Springs world headquarters features a public Visitors Center with two main areas – the El Pomar Space Gallery and the Northrop Grumman Science Center featuring Science On a Sphere®. The Space Foundation also conducts research and analysis and government affairs activities from its Washington, D.C., office and has a field office in Houston, Texas. For more information, visit www.SpaceFoundation.org. Follow us on Facebook, LinkedIn and Twitter, and read about the latest space news and Space Foundation activities in Space Watch.