The View From Here: The Final Frontier- Pioneers Wanted!

“Space. The final frontier. These are the voyages of the starship Enterprise – its continuing mission to explore strange new worlds, to seek out new life and new civilizations, to boldly go where no one has gone before.” – Gene Roddenberry 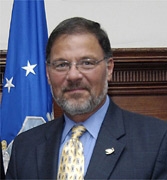 Drawing comparisons between fictional space programs, like that of Gene Roddenberry’s visionary Star Fleet, and real programs, like those of NASA, is a risky proposition. In the idyllic world of science fiction’s future, pork barrel politics and internecine skirmishes between Democrats and Republicans, Congress and the administration, never get in the way of a good story.

Yet there’s a fundamental link between NASA and Star Fleet: human curiosity… the desire to explore … the creation of both real and imaginary pioneers who carry the hopes and aspirations of humanity upon their shoulders as they “boldly go where no one has gone before.”

This week the Space Foundation released one of our most important white papers to date – PIONEERING: Sustaining U.S. Leadership in Space. While our report is based on a year’s worth of research into, and cold analysis of, the U.S. civil space enterprise, I find it comforting that our exhaustive crunching together of history, budgets, programs, perspectives and the findings of countless previous reports and recommendations should finally be distilled into a most human recommendation:

America should adopt for NASA a pioneering doctrine of space exploration that brings a focused, disciplined and strongly supported singularity of purpose to the world’s most capable, and most important, civil space agency.

The 70-page PIONEERING: Sustaining U.S. Leadership in Space summarizes analyses of virtually every blue-ribbon panel report done on NASA since 1986, in-depth interviews with more than 100 senior leaders from across the space enterprise, analyses of NASA’s funding profile (including presidential budget submissions, actual authorizations and appropriations and out-year forecasts for every administration), as well as assessments of the cost impacts of program starts, stops and cancellations and analyses of NASA outlays in constant 2010 dollars as compared to all other federal accounts.

The input was complex, deep and broad. Yet, the findings – compiled and articulated by our own research and analysis team – are startlingly simple: NASA needs a clear, unambiguous purpose.

The plethora of competing and sometimes conflicting missions that have crept into the agency’s job jar over the past four decades need to be sorted and rationalized against a single organizational purpose. And, not a bureaucratic, pedantic purpose… rather something very human and very inspirational.

We believe NASA’s purpose should be pioneering. Yes, boldly (and efficiently) going where, indeed, no one has gone before – so that others may follow. We’re not talking about a whim here, we’re talking about a solid process that reaps rewards for our economy, our national pride, our industrial base and our future generations.

The process has four steps – covered in detail in the report. Simply put, the proposed pioneering doctrine says that NASA needs to engage itself with four things, all designed to open up new worlds and new knowledge:

Defining a singular purpose provides the framework to better manage ambiguity in direction from Congress and the administration and to minimize the impact of shifting political winds.

The recommendations we offer in PIONEERING: Sustaining U.S. Leadership in Space are, of course, much more detailed in addressing the “how” of implementing a doctrine that we see as transformational, powerful and far reaching. Key among our recommendations – described in more detail here – are:

As I mentioned before, PIONEERING: Sustaining U.S. Leadership in Space is 70 pages long. I’m obviously paraphrasing for the sake of brevity. You can read the scope of recommendations at www.spacefoundation.org/research/pioneering – in the full report or an executive summary.

Do we expect someone to snap their fingers and make all the changes we recommend tomorrow?

Rather, we hope to stimulate discussion leading to meaningful change. We know this could be a lengthy process, but we’ll do all we can to move the discussion along so that the U.S. can regain its strength in space. To make that happen, we want to hear from you. Send your thoughts and comments to us at [email protected]. Or engage in discussion with us on Facebook, LinkedIn or Twitter (#pioneerspace). Share the report with your colleagues. As far as we’re concerned, the more voices we hear from, the better.

Let’s get Back to the Roots that Make Us Great

There’s an often-told story in our business, about a reporter visiting a NASA center during the Apollo program. As he was walking down the hall, he stopped and asked a janitor, “and just what is your job around here?” Allegedly, without pause, the janitor replied “my job is to help put a man on the Moon.”

This country we call the United States of America has always been about pioneering. This ethos of trailblazing and paving the way for discovery is what America, and NASA, have always really been about. But, since landing on the Moon more than 43 years ago, our lack of a national purpose in space (and the ‘short attention span theater’ that passes for political discourse) has led to a space program played backward in slow motion: going from a presence on the lunar surface, to operations only in low Earth orbit, to the final flight of the Space Shuttle with no capability to send astronauts into space aboard U.S. vehicles.

We know better. We can do better.

There are still plenty of Americans who understand the value of boldly going where no one has gone before. And NASA is still the agency that can lead us there.

Of all the explorable and interesting places that exist in our solar system and beyond, we have barely begun to imagine the future that awaits us in space. The View from Here is that a laser-focused purpose of pioneering can set NASA, the U.S. and the world on a sustainable course of leadership in space that is truly ‘one giant leap for mankind.’