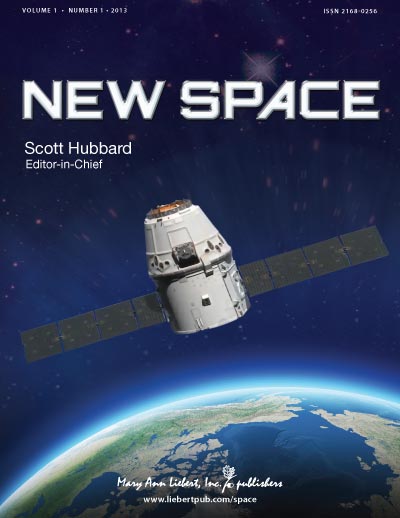 The inaugural issue of New Space magazine, published by Mar Ann Liebert, Inc., and edited by Scott Hubbard, features an editorial on new space by Space Foundation Chief Executive Officer Elliot Pulham, who serves on the magazine’s editorial board.

New Space, which was officially launched at the 29th National Space Symposium in April, is a peer-reviewed journal that facilitates and supports the efforts of researchers, engineers, analysts, investors, business leaders and policymakers to capitalize on the opportunities of commercial space ventures. Spanning a broad array of topics including technological advancements, global policies and innovative applications, New Space is published quarterly online with Open Access options and in print.

Complete table of contents are available on the New Space website. 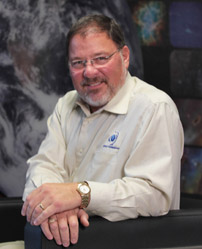 Welcome to the New Space age – where 75 percent of space activity is commercial, yet governments still act like they, rather than the markets, are in charge; where almost no one can name a NASA astronaut, but anyone under 30 will tell you the closest thing to Buck Rogers is a 42-year-old internet mogul and techno wizard named Elon Musk; where Pluto is no longer a planet, the United States can no longer put a human in space (but China can) and more than two billion people carry miniaturized satellite ground stations called “smart phones,” whose functionality for communication and geolocation depends upon a constellation of 32 satellites, provided free of charge on a global basis, by the U.S. Air Force.

This New Space age is a time of change and upheaval, when the capabilities once resident in just two national space agencies morph and evolve into a global pipeline of tech incubation stoked by the efforts of some 70 national space organizations around the globe. Every agency has a program or priority, as well as a technical weakness or funding shortfall. These civil servants depend upon the expertise and capacity of hundreds of space specialist companies and thousands more of their vendors.

While some of the best and brightest still reside at NASA or Roscosmos, increasingly they are found in Germany, France, the United Kingdom, China, Japan, Brazil, Spain, Italy, India and, perhaps somewhat worrisome, in places like Iran and North Korea. Space expertise continues to build within companies that launch or operate fleets of commercial satellites, as it wanes from national space agencies who continue to operate under the cultural delusion that they, alone, are the experts.

Into this chaos strides a catalyst. The entrepreneur.

For the casual observer, it’s easy to think of entrepreneurs as glitzy, swaggering individuals – idiosyncratic Howard Hughes types with massive egos and personality quirks ranging from quaint to terrifying. But corporate entrepreneurs and idea hatcheries at universities also challenge the status quo – often in remarkable ways.

The result is a space milieu in which:

The foamy crest of this wave of space entrepreneurs would appear to be the high-profile billionaire. Elon Musk, Richard Branson and Robert Bigelow leap to mind. But the mass of water under that foamy crest comprises established space companies that are operating in increasingly entrepreneurial ways.

Somewhat smaller companies seem to be getting their due. Sierra Nevada Corporation is turning heads with its Dream Chaser reusable spacecraft, which is being built and tested in Colorado. In Virginia, Orbital Sciences is getting ready to launch its Cygnus spacecraft, which is proposed to join the SpaceX Dragon capsule in providing commercially contracted space transportation services to and from the International Space Station.

SpaceX, of course, owns the distinction of being the first private company to build, launch, orbit and recover an orbital spacecraft. The company performed the first commercial servicing mission to and from the ISS. Perhaps most breathtaking, the company’s Dragon capsule was first tested in orbit and later launched to the ISS using the company’s privately developed Falcon 9 heavy-lift launch vehicle. Talk about keeping as much of the value chain as possible inside the company!

But the wall of this wave of space entrepreneurship also advances on the momentum of some well-established aerospace giants. You might think that Boeing and Northrop Grumman are staid and conservative stalwarts of the military industrial complex. And you would be right. But they are also corporations that have historically “bet the company” on audacious gambles. (When Boeing’s 747 was rejected by the U.S. Air Force, the company “rolled the dice” and commercialized the jumbo jet, which has more than secured its place as the most successful commercial jetliner in history.) Thus, you have Boeing developing its Commercial Crew Transportation System for ISS and other applications, and Northrop Grumman “all in” with the development of the Virgin Galactic fleet of suborbital spacecraft.

Of course, the challenges that confront this field are also enormous. It remains to be seen whether the major space agencies of the world will ever regain their mojo. Government regulation of international trade in space technology continues to suppress sales volume, thwart innovation and stymie investment in research and development. Orbital debris has become the industry’s l’enfant terrible, the destructive child we all agree must be disciplined, just as long as someone else pays for it.

Still, even as NASA and other space agencies struggle to update their raison d’être, public passion for the development, exploration and utilization of space has probably never been higher. In what other endeavor would tens of thousands of people around the world gather in vigil, holding humanity’s collective breath, as a spacecraft no larger than the family car approached its fiery, high-risk landing on Mars? Such was the case with the landing of Jet Propulsion Laboratory’s (JPL’s) Mars Curiosity Rover, a cultural phenomenon that united people around the home planet and nearly brought the internet to its ever-loving knees.

A new age of space exploration and development is upon us, and it will look very different from the past 50 years. From the most wild-eyed mad scientist to the most conservative corporations, entrepreneurs, bureaucrats and everyone in between – this New Space age needs all of us.

Let’s get in our spaceships and go!