The Space Foundation will be well represented at the 65th International Astronautical Congress (IAC) in Toronto later this month in support of its Director – Education Bryan DeBates who will receive the prestigious Frank J. Malina Astronautics Medal. 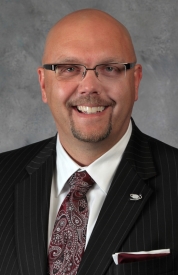 DeBates administers the development and implementation of the Space Foundation’s education programs that support space-based science, technology, engineering and mathematics (S-STEM) education. He was named 2014 recipient of the award for his many years using space-themed education programs for students and educators to inspire interest in STEM subjects in the classroom. DeBates “has taken the fullest advantage of the resources available to him to promote the study of astronautics and related space science.”

Established in 1986 by the International Astronautical Federation (IAF), the Frank J. Malina Astronautics Medal was first presented posthumously to Sharon Christa McAuliffe, first NASA Teacher in Space. Since then, this international award has been presented to outstanding educators who have demonstrated excellence in promoting the study of astronautics and related space sciences.

DeBates will deliver a keynote presentation at the IAC on the subject of primary education, and the Malina medal will be presented to him during the IAC closing ceremony.