Expanding the Space Economy Beyond Earth Orbit: The Need for Deep Space Exploration

This month’s Second View is by Space Foundation Director – Research & Analysis Micah Walter-Range. This article is based on a presentation delivered at the Economy and Exploration Leadership Forum in Chicago on Oct. 7, 2014.

Since the Space Foundation started tracking the size of the global space economy in 2005, we have seen growth every single year, in spite of the fact that there was a global recession in the middle of that period and many nations are still struggling with fiscal challenges. Adjusting for inflation, the space economy grew by 40 percent over eight years.

There are many different economic sectors that make up the space economy, which we combine into four main categories: commercial space products and services, commercial infrastructure and support industries, U.S. government budgets, and non-U.S. budgets. As shown in Exhibit 1, the red and blue commercial segments made up more than three quarters of the global space economy in 2013, adding up to $240 billion out of a total of $314 billion. Although there has been growth in government budgets over the years, the commercial sector is growing much more rapidly. The demand for services such as satellite television, communications, Earth observation and navigation is continuing to expand, particularly in developing nations. 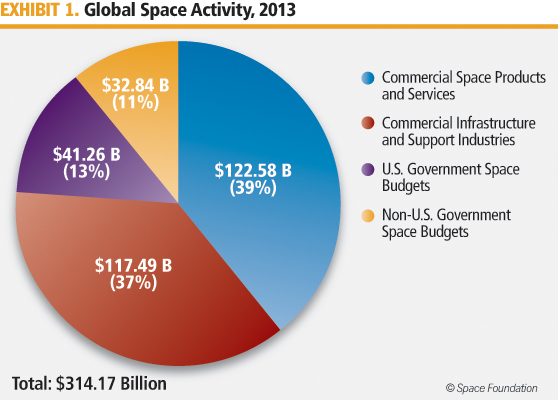 Governments are aware of the opportunities for commercial growth, which is why we see increasing numbers of countries participating in space. Many of them start out by simply purchasing a satellite from one of the established spacefaring nations, but more and more of them are also taking the next step and establishing a domestic industry that can produce their own satellites.

These countries are not focused solely on providing day-to-day services to their citizens. There is also a tremendous interest in conducting research in space and using space as a means of building human capital that benefits other high-tech industries. At the Space Foundation, we’ve seen what a fantastic tool space can be for sparking student interest in a wide range of scientific and technical subjects. This is one of the reasons why nations are interested in exploration in addition to Earth-focused services.

For example, India has had a space program for decades, placing a higher priority on essential services for its citizens instead of launching exploration missions. The country has recently started to put more effort into looking outward, as evidenced by its successful Mars Orbiter Mission (also known as Mangalyaan) earlier this year. Other countries move into the exploration phase much more quickly. The United Arab Emirates just approved the first budget for its newly formed space agency, which already has a goal of sending a mission to Mars by 2021. Exploration is increasingly seen as a critical component of a country’s space program.

For thousands of years, human economic activity was restricted to the surface of the planet, and more recently its atmosphere when we learned to fly. With the dawn of the Space Age, we were able to expand our economic activity to a larger sphere, stretching from low Earth orbit to geosynchronous orbit. As mentioned above, in 2013 alone that was worth around $240 billion to the commercial space industry, and the impact of those services on all the other industries in the world is easily at least a trillion dollars. Almost all of this activity has been based on the flow of information from one place to another – whether it is TV broadcasting or satellite imagery.

What will happen when we expand our sphere of economic activity again? How many billions or trillions of dollars will be generated by entirely new categories of economic activity, like harvesting minerals from captured asteroids, or producing rocket fuel on the surface of the Moon, or biotech research that will enable us to grow plants on Mars? If we want to experience this economic growth, we need to continue to push outward and do the exploration that is a necessary precursor for these activities.

I will grant you that there are some concerns about the cost of space exploration, but a little bit of context can be helpful in situations like this. If you take the amount of government funding for space activity at NASA between President Kennedy’s declaration that the United States would send people to the Moon and the time when Neil Armstrong actually set foot on the Moon, and you put that in today’s dollars, it is a little bit less than the revenue generated by the global commercial space industry in 2013 alone. Those were the highest budgets ever available for space exploration, and they add up to less than one year of commercial revenue today. We have come a long way over the years.

I cannot predict exactly what economic benefits deep space exploration is going to bring, but I do know there is a very strong historical precedent for saying that exploration is economically worthwhile. I expect there will be some surprises and unanticipated developments along the way, but I am definitely looking forward to seeing how things turn out. The economic imperative is there, and the question now is one of who will reap the benefits.