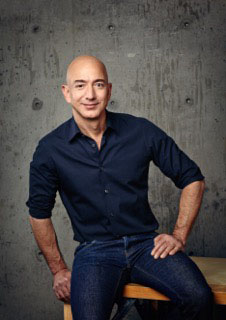 About Bezos
Jeff Bezos is the founder of aerospace company Blue Origin, which is working to lower the cost and increase the safety of spaceflight so that humans can better continue exploring the solar system.

Bezos is also Amazon Founder and CEO. Bezos founded Amazon.com in 1994 with a mission for it to be Earth’s most customer-centric company. Amazon offers low prices and fast delivery on millions of items, designs and builds the bestselling Kindle hardware and empowers companies and governments in over 190 countries around the world with the leading cloud computing infrastructure through its Amazon Web Services offering.

About Blue Origin
Blue Origin, LLC, is a private company developing vehicles and technologies to enable commercial human space transportation. Blue Origin has a long-term vision of greatly increasing the number of people that fly into space so that we humans can better continue exploring the solar system. For more information and a list of job openings, please visit www.blueorigin.com.