Report on Space Foundation Participation in Delegation to UN Meetings 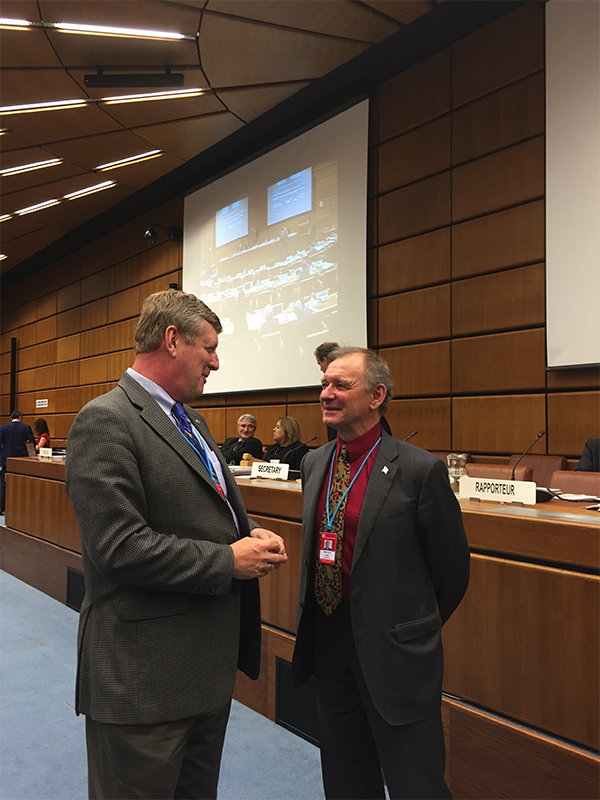 The Space Foundation participated June 8-17 in the 59th Session of the Committee on the Peaceful Uses of Outer Space, at the United Nations Office in Vienna. The Committee meets every year to promote international cooperation in the peaceful uses of outer space. During this year’s session, David Kendall, of Canada, assumed the chair of the Committee.

The Space Foundation also co-hosted with the State Department and American Institute of Aeronautics & Astronautics the official U.S. reception for all delegates and UNOOSA officials.

According to the UN Information Office, the results of the Committee meeting include:
‎

The Committee approved seven thematic priorities for UNISPACE+50, a special session of the Committee set to take place in 2018 to mark the 50th anniversary of the first UN Conference on the Exploration and Peaceful Uses of Outer Space. The priorities are:

COPUOS recommended that a joint panel discussion by the Disarmament and International Security Committee (First Committee) and the Special Political and Decolonization Committee (Fourth Committee) of the UN General Assembly be held during the 72nd session of the Assembly in 2017. This meeting will also acknowledge the 50th anniversary of the Outer Space Treaty next year.
‎
The Committee endorsed a recommendation for the global observance of an international asteroid day annually on June 30, to be proclaimed by the General Assembly at its 71st session later this year. An international asteroid day will raise public awareness of the asteroid impact hazard and inform the public of global communication measures in case of a credible near-Earth object threat.
‎
The Committee received New Zealand’s application for membership and the International Air Transport Association’s application for permanent observer status. These applications were endorsed and will be submitted to the United Nations General Assembly for approval.
‎
Other agenda items included space and sustainable development, water and climate change, as well as the spin-off benefits of space technology and the use of such technology within the United Nations system.
‎
In a new outreach initiative, the first Annual Report of the United Nations Office for Outer Space Affairs (UNOOSA) was presented to the Committee by the Director-General of the United Nations Office at Vienna, Yury Fedotov, and UNOOSA Director Simonetta Di Pippo.
‎
The report of the Committee will be presented for approval to the United Nations General Assembly’s 71st session later in the year.