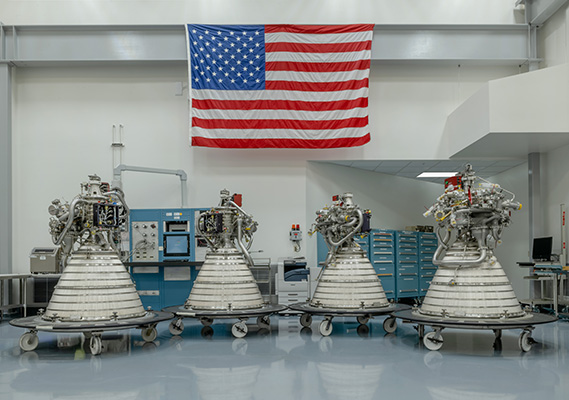 WEST PALM BEACH, Fla., Feb. 3, 2020 – Aerojet Rocketdyne recently delivered four RL10 upper stage engines to NASA’s Stennis Space Center that will help power NASA’s Space Launch System (SLS) rocket as it carries astronauts aboard the Orion spacecraft to deep space. These missions are part of NASA’s Artemis program, which will land the first woman and next man on the Moon, and set the stage to send astronauts to Mars.

A single RL10 engine will provide nearly 25,000 pounds of thrust and serve as the main propulsion for the Interim Cryogenic Propulsion Stage (ICPS) that will fly atop the SLS rocket Block 1 in support of each of the first three Artemis missions. Later Artemis missions will use the evolved SLS Block 1B rocket configuration that includes the Exploration Upper Stage (EUS) powered by four RL10 engines to send Orion and large cargos to the Moon. The four RL10 engines on EUS provide more than 97,000 pounds of thrust.

Evolving the SLS rocket to the Block 1B version that uses EUS significantly increases the amount of payload that can be carried to lunar orbit; up to 40 metric tons compared to the 26 metric ton capability provided by the SLS Block 1 configuration. It also provides the option for “co-manifested” payloads such as large components for NASA’s Gateway orbiting lunar outpost, landers, or surface systems.

Aerojet Rocketdyne has completed engine qualification testing for EUS and all other engineering activities, including providing NASA with the information necessary for the agency to human rate the RL10 engines. Qualification of the engines for ICPS will be completed in 2020.

About Aerojet Rocketdyne:
Aerojet Rocketdyne, a subsidiary of Aerojet Rocketdyne Holdings, Inc. (NYSE:AJRD), is a world-recognized aerospace and defense leader that provides propulsion systems and energetics to the space, missile defense and strategic systems, and tactical systems areas, in support of domestic and international customers. For more information, visitwww.Rocket.com and www.AerojetRocketdyne.com. Follow Aerojet Rocketdyne and CEO Eileen Drake on Twitter at @AerojetRdyne and @DrakeEileen.