Statement on the Passing of the Honorable Peter B. Teets 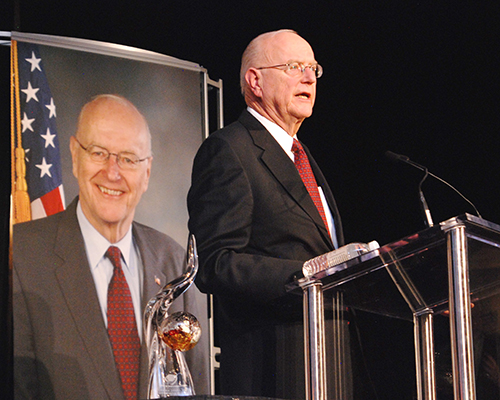 COLORADO SPRINGS, Colo. — Dec. 8, 2020 — Space Foundation, a 501(c)(3) global space advocate for nearly 40 years, today announced that the organization is greatly saddened to learn of the passing of the Honorable Peter B. Teets, a longtime friend and steadfast supporter of the organization’s mission.

As a space community pioneer for more than four decades, Teets served industry, government, and national security interests at the highest levels, bringing excellence and achievement in business, along with performance and integrity at every juncture. As exemplified by his notable career, Under Secretary/Director Teets understood that relationships matter, and he spent his life’s work building partnerships and collaborations that advanced the science, engineering, policy, and security capabilities that are at the core of today’s space renaissance. 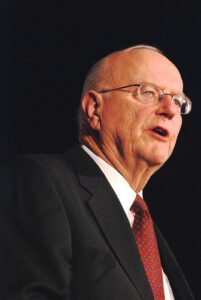 Peter B. Teets delivers his acceptance speech for the Gen. James E. Hill Lifetime Space Achievement Award at the 25th Space Symposium in 2009.

It was for these efforts and more that he was selected by Space Foundation’s board of directors in 2009 as the recipient of the organization’s highest honor, the General James E. Hill Lifetime Space Achievement Award, at the 25th Space Symposium. Presented annually, the Hill Award recognizes outstanding individuals who have distinguished themselves through lifetime contributions to the welfare or betterment of humankind through the exploration, development, and use of space, or through the use of space technology, information, themes, or resources in academic, cultural, industrial, or other pursuits of broad benefit to humanity. In each of these categories, Peter Teets was an exemplary example.

In addition to receiving the Space Foundation’s Hill Award, Teets was part of the inaugural class of inductees into the Colorado Space Heroes Hall of Fame in 2016. He was also appointed as an Honorary Member of Space Foundation’s board of directors.

Tom Zelibor, CEO of Space Foundation shared his own personal reflections on Under Secretary/Director Teets, adding that, “During my Navy career and later at Space Foundation, his counsel and mentorship to me were profound and deeply rewarding on many levels. I will always be grateful for the time and energy he invested in me, and I know I’m not alone in that sentiment. Peter Teets was a gentleman and leader of the finest order, and I am all the better for having known him. Today’s space renaissance that we enjoy in the commercial, civil, and national security arenas was heavily influenced by his groundbreaking work and leadership across each of those sectors.” 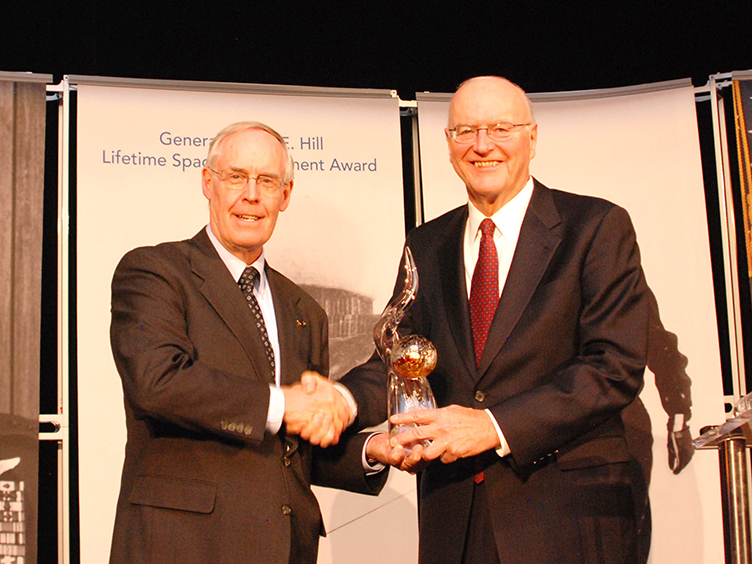 Teets served as Under Secretary of the U.S. Air Force and Director of the National Reconnaissance Office from Dec. 2001 through March 2005. During that time, he was also designated as the first-ever Department of Defense Executive Agent for Space, with responsibility for developing, coordinating, and integrating plans and programs for space systems. He retired as President and Chief Operating Officer of Lockheed Martin Corporation in 1999, following a 36-year career with Martin Marietta and Lockheed Martin.