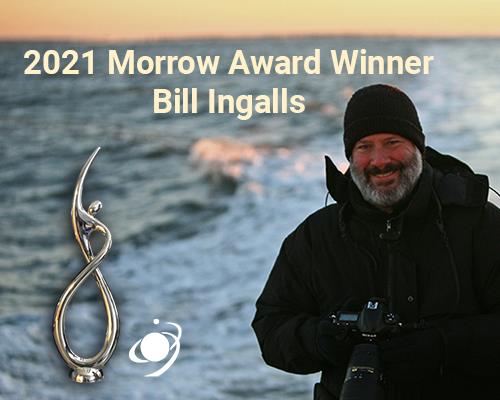 COLORADO SPRINGS, Colo. — June 16, 2021 — Space Foundation, a nonprofit advocate organization founded in 1983 for the global space ecosystem, today announced Bill Ingalls as the recipient of the 2021 Douglas S. Morrow Public Outreach Award. As senior contract photographer for NASA headquarters since 1989, Ingalls has captured moments such as Space Shuttle Endeavour’s final landing and the Dante II robot’s exploration of an active volcano. Ingalls’ work has greatly contributed to public knowledge of aeronautics and its impact on humankind.

Space Foundation presents its Douglas S. Morrow Public Outreach Award annually to an organization or individual who has made significant contributions to the public awareness and understanding of space programs and technology. The award was named for an Academy Award-winning writer and producer, space advocate, and early member of the Space Foundation board of directors.

In announcing this year’s recipient, Space Foundation CEO Tom Zelibor shared, “Bill Ingalls’ gifts and contributions to the global space community in capturing the people, missions and achievements of space exploration across more than three decades makes him a more-than-worthy recipient of this award. Like the award’s namesake, Bill has connected people far and wide and truly touched the world with his work. It is visual artistry like his that opens eyes, hearts and minds to what we as a species are capable of doing when we work together.”

The award will be presented Aug. 23, 2021, during the 36th Space Symposium opening ceremony, to be held at The Broadmoor in Colorado Springs. The ceremony will also be simulcast online as part of Space Symposium’s all-new virtual experience.

The Space Symposium website contains the latest speaker and agenda updates. This year will mark the debut of the event’s hybrid — in-person and virtual — format, providing greater opportunities for members of the global space community to engage, learn, share knowledge and network. Tickets are available at www.spacesymposium.org/fees-tickets-and-policies/.

Bill Ingalls has never traveled to space but has documented the U.S. space program for over three decades. As senior contract photographer for NASA headquarters since 1989, he has captured some of space’s most historic and dramatic moments. He has photographs from inside an active volcano capturing the Dante II robot, inside of a hurricane on a DC-8, and in subzero temperatures to capture the return of U.S. astronauts aboard Russian Soyuz. Known as the man behind the lens, his photographs portray emotions from triumph to contemplation. He captured moments such as Space Shuttle Endeavour’s final landing, the first launch of a U.S. citizen on a Russian rocket, and the burial at sea of Neil Armstrong. National Geographic, Newsweek, TIME, The Washington Post, Fortune, People, The New York Times, the Los Angeles Times, NBC, ABC, and CBS have used his images to tell the story of spaceflight. Learn more at https://ingallsimages.com/about.

Space Symposium is the premier assembly for the global space ecosystem, hosted by Space Foundation since 1984. The live event is widely attended by commercial and government leaders, young professionals, entrepreneurs, and educators in Colorado Springs, Colorado. This year’s 36th Space Symposium will enable its thousands of global attendees to seamlessly engage and conduct business both in-person and virtually via Symposium 365 Digital Platform. For more information, please visit www.space symposium.org.

Symposium 365, a division of Space Foundation, is the premier source for media and events in the global space ecosystem, offering authoritative news and information and venues for networking and conducting business via the world-renowned Space Symposium, Symposium 365 Digital Platform and The Space Report.  Serving commercial, government and education sectors, Symposium 365 produces signature programming — live and online — for professionals, entrepreneurs, educators and students to learn, connect and conduct business 365 days a year. To learn more about Symposium 365, please visit www.spacesymposium 365.org.

Space Foundation is a nonprofit advocate organization founded in 1983, offering a gateway to information, education and collaboration for space exploration and space-inspired industries that define the global space ecosystem. Driven by a partnership model, Space Foundation operates three divisions that unite the entire spectrum of stakeholders — business, government, education and local communities — through corporate membership, sponsorship, fundraising and grants: Symposium 365 is the premier source for media and events, including the world-renowned Space Symposium and The Space Report. Center for Innovation and Education is a lifelong learning platform. Global Alliance facilitates collaboration around the world. Visit Space Foundation at www.SpaceFoundation.org, and follow us on Facebook, Twitter, Instagram, LinkedIn and YouTube.