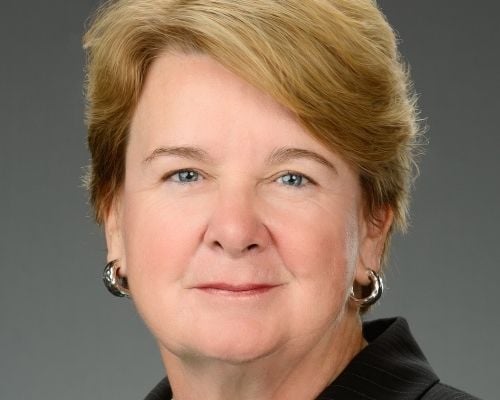 Maguire’s impactful career in the space ecosystem spanned many decades, and she was highly successful in leadership and senior management roles entirely focused on space at both TRW (acquired by Northrop Grumman) and Lockheed Martin. Joanne retired in May 2013 from Lockheed Martin Corporation where she served as executive vice president, Lockheed Martin Space (LMS) and first female corporate officer.

Prior to Lockheed Martin, she spent 28 years at TRW’s Space and Electronics sector, (now part of Northrop Grumman) assuming progressively responsible leadership roles in engineering and technology, programs, manufacturing and business development, culminating in her appointment as deputy to the sector CEO.

Maguire, an advocate for inclusion in the space ecosystem, increased the number of women in leadership and executive roles while at LMS. She was an executive sponsor for the corporate-wide Women’s Leadership Forum and a key leader of Lockheed’s LGBTQ Leadership Forum.

Recognized as a trailblazing woman executive in space, Maguire is the first female recipient of the prestigious International von Kármán Wings Award from California Institute of Technology, and, in 2009, she received the Society of Women Engineers’ Upward Mobility Award for pioneering work in aerospace engineering and diversity management. Joanne was ranked numerous times in Fortune magazine’s 50 Most Powerful Women in Business and was inducted into the Colorado Women’s Hall of Fame in 2014. In 2017, UCLA named her Engineering Alumna of the Year. Her professional accolades include selection as a fellow of the American Institute of Aeronautics and Astronautics (AIAA) and election to the National Academy of Engineering.

Maguire currently serves as independent director on the boards of CommScope Holding Company, Visteon Corporation, and TetraTech. Active in her support of nonprofits, she is a board member for Draper Laboratory (an independent nonprofit research and development organization) and serves on the Dean’s Executive Board at UCLA’s Samueli School of Engineering.

Commenting on Maguire’s selection for the award, Space Foundation CEO Tom Zelibor said, “All of us at Space Foundation are deeply humbled and honored to present Ms. Maguire with the prestigious Hill Award. The enormous impact of her many works — technically, operationally and programmatically, here on Earth and beyond — have changed our world and universe for the better. From enhancements to weather satellites that have saved countless lives and property globally to pioneering new missions and discoveries on Mars and around Jupiter, her career and leadership are a tremendous inspiration.”

Named in honor of Space Foundation’s late, longtime chairman, Gen. James E. Hill, USAF (Ret.), the award recognizes outstanding individuals who have distinguished themselves through lifetime contributions of 20 years or more to the welfare or betterment of humankind through the exploration, development and use of space, or the use of space technology, information, themes or resources in academic, cultural, industrial or other pursuits of broad benefit to humanity.

The award will be presented at the opening ceremonies of Space Foundation’s 37th Space Symposium, to be held April 4-7, 2022, at The Broadmoor in Colorado Springs.