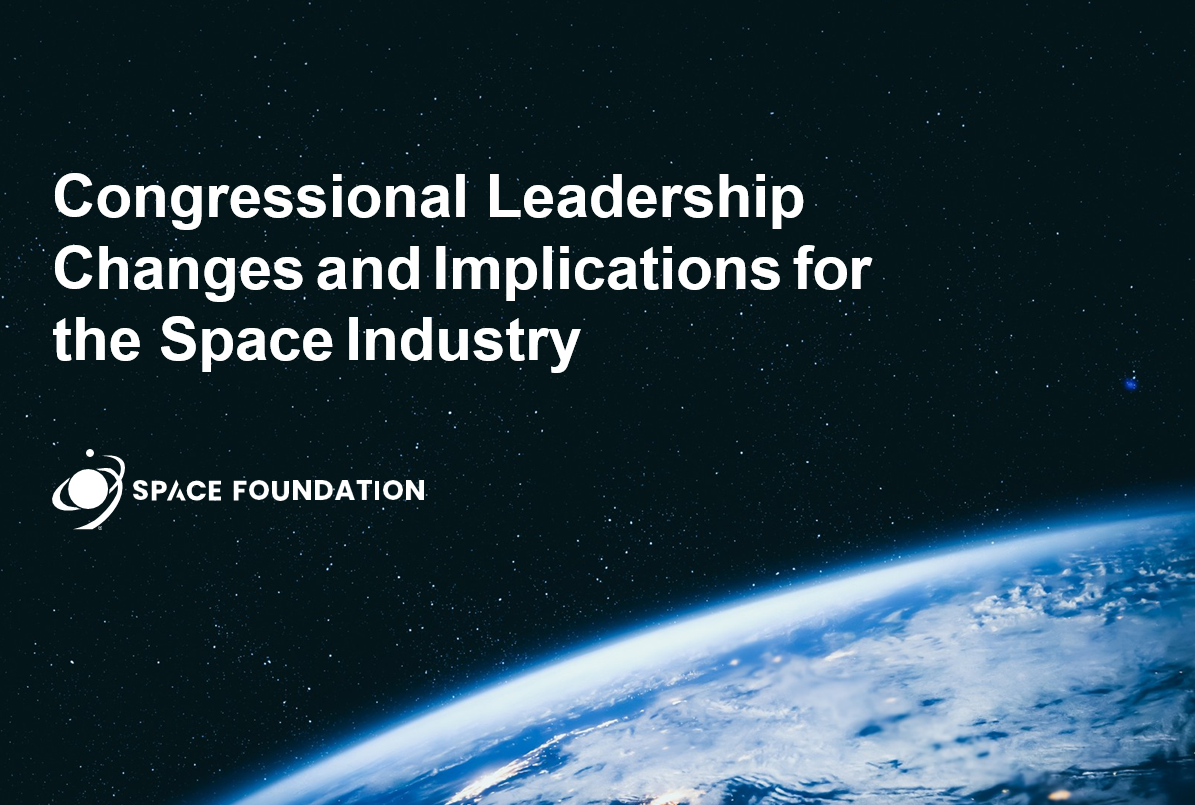 The midterm election cycle is at its height. Within a few weeks, the space community will know the makeup of the 118th Congress, where the power will lie, and who will likely lead committees in Washington D.C.

First, a moment to honor lawmakers who have passed away during the 117th Congress:

Rep. Ed Perlmutter, D-CO, who championed NASA’s planned mission to Mars, and Sen. Richard Shelby, R-AL, who battled for the Space Launch System, will retire at the end of the year. Also retiring is Rep. Eddie Bernice Johnson, D-TX, who advocated measures to boost science, technology, engineering, and mathematics education to increase the space industry’s workforce.

Defense advocate Rep. Jim Cooper, D-TN, is also stepping down along with Rep. Jim Langevin, D-R.I. Both were stalwarts on the Strategic Forces Subcommittee of the House Armed Services Committee, which oversees the Pentagon’s programs in orbit.

Midterms elections have historically been a time of change and readjustment to political cycles. This election cycle could sweep in many fresh faces, with Democrats facing their highest turnover rate since 2012. While this is in line with other changes in power during a midterm election; often these happen after a shift in White House leadership. In 2022, the turnover has an outsized number of lawmakers with ties to space committees heading for the exits before the election. More turnover is expected as voters head to the polls with Democrats holding a slim four seat majority in the House and holding sway in the 50- 50 Senate due to the tie-breaking vote of Vice President Kamala Harris. Political insiders and observers are on the edge of their seats awaiting the November 8 vote.

With primary elections wrapped up a brief snapshot of changes.

1Nearly one in six lawmakers who were sworn into office on Capitol Hill when the 117th Congress began will not return for the 118th in January.

• 65 House members, including 27 Republicans and 36 Democrats, retired or lost seats in failed primary campaigns.
• 6 Senators, 5 Republicans and 1 Democrat, are retiring at the end of the Congress.
• 15 House Representatives have resigned ordied in the past two years.
• 14 Members of committees impacting military and civilian space programs are leaving.

Within the turnover, the biggest impacts could be felt on the Senate Appropriations Committee, where Sen. Shelby and Sen. Patrick Leahy, D-VT, are both retiring from top leadership posts. Sen. Shelby, whose state includes NASA’s Marshall Space Flight Center in Huntsville and the Army’s Space and Missile Defense Command at Redstone Arsenal, has been a stalwart for military and civilian space spending. Next in line for his Appropriations post is Sen. Susan Collins, R-ME, whose state includes a proposed spaceport and growing set of space technology firms. While better known for holding the gavel on the Senate Judiciary Committee, Sen. Leahy has pushed for bigger defense budgets from his post as chairman of Appropriations. His likely replacement is Sen. Patty Murray, D-WA., whose state includes operations for major defense contractors including Boeing along with new space companies including Blue Origin.

Current Chairwoman Sen. Jeanne Shaheen, D-N.H. and Ranking Member Sen. Jerry Moran, R-KA, sit atop the Commerce, Justice and Science Appropriations subcommittee that oversees civil space funds. The committee’s defense budgets are overseen by a subcommittee led by Chairman Jon Tester, D-MO, with Sen. Shelby as the ranking member. Senators Tester, Moran, and Shaheen will not be facing the ballot box this fall, but what committee positions they hold will depend on the outcome of the November contest, which decides the party that holds Senate committee gavels.

Sen. Roger Wicker, R-MS will likely move to the senior Republican spot on the Senate Armed Services Committee, which leaves the leadership positions on the Commerce Committee up in the air, including if Sen. Maria Cantwell, D-WA will retain her spot atop the Committee. As to the Subcommittee on Space and Aviation, Sen. Ted Cruz, R-TX, is the likely GOP pick to lead his party’s efforts. On the other side of the aisle, Sen. John Hickenlooper, D-CO, currently serves as the Subcommittee’s Chairman. The election could shake up committee structures across Capitol Hill, with lawmakers shifting assignments as a new class of freshmen move in and leadership priorities change.

In the House Science Committee, Rep. Eddie Bernice Johnson, D-TX, has held the top Democratic spot since 2010, is retiring after 15 terms, leaving leadership in flux. Rep. Brian Babin, R-TX, and Rep. Don Beyer, D-VA, must each win re-election to keep their posts and await the overall outcome to see if they will lead the House Science Subcommittee on Space and Aeronautics.

This does not touch on the large holes that Representatives Langevin and Cooper leave on the House Armed Services Committee Subcommittee on Strategic Forces in the Space Defense policy world.

1RETIREMENTS AS A PERCENTAGE OF PARTY CAUCUS

Senate
Sen. Richard Shelby, R-AL, a powerhouse on the Appropriations Committee, was a key advocate for NASA’s Space Launch System, with the Artemis I launch seen as the capstone of 36 years in the Senate.

House
Rep. Mo Brooks, R-AL, lost a primary battle for a Senate seat and is leaving after six terms. He has served on committees overseeing defense and civil space plans and represents Huntsville, a key space technology hub.

Rep. Jim Cooper, D-TN, considered the last of the fiscally conservative “Blue Dog” Democrats, is Chairman of the Strategic Forces Subcommittee and helped found the Space Force. Often a critic of Pentagon spending, Cooper was an advocate for space programs.

Rep. Anthony Gonzalez, D-OH, represented a district on the outskirts of Cleveland and was an advocate for NASA’s Glenn Research Center. He opted to retire from Congress after redistricting consolidated his district.

Rep. Eddie Bernice Johnson, D-TX, first elected to the House in 1992, was the first woman and first African American to serve atop the House Science Committee. Serving Houston, home to NASA’s Lyndon B. Johnson Space Center, Rep. Johnson was an advocate for diversity in the space industry and improved educational opportunities to put children on the path to space careers.

Rep. Jim Langevin, D-RI, has represented Rhode Island for over 20 years. He is a member of the House Aerospace Caucus and co-chairs the Congressional Cybersecurity Caucus which was a specific focus of his policy portfolio. Additionally, he serves on the House Armed Services Strategic Forces Subcommittee, which oversees space assets and programs.

Rep. Ed Perlmutter, D-CO, whose district north of Denver includes a string of key NASA contractors, is a staunch supporter of NASA programs to monitor climate and send astronauts to Mars. He is known for sporting a Mars 2033 bumper sticker to remind the space community of the next big goal.

There is still a lot of unknown and much to be decided after voters cast their ballots. Control of both houses of Congress means control of committees that set policy and budgets, which guides the space community. In the meantime, the community will continue to seek ways to innovate but without guidance, funding and regulation from space policy leaders, there will always be an air of uncertainty.

It is unclear where all the dust will settle but we do know the leadership landscape will look different than it does today. Our challenge is to take this opportunity to advocate and encourage both existing and new members and staff to be the future space policy champions that will advocate for proactive space policies and funding.

Everyone should be a champion for space, and it is the space community’s job to educate and inform Congressional leaders. There is no other community or ecosystem that has the inspirational magnetism or “cool factor” that space offers. As such the community needs to simply be willing to engage excited new members and staff. This means not limiting outreach to those with space assets, but also those taking advantage of leaders who will make movements to protect and support the space world and expand and bolster the STEAM (Science, Technology, Engineering, Arts, and Mathematics) workforce. Additionally, gathering voices outside the standard subset will do much to diversify space policy thought, and should not be overlooked. We must consider where the next great space champions will come from, and not be afraid to keep searching for them. That is why the space community needs to make sure we have continuity and informed leaders at all levels throughout changes in power. Efforts like those promote the sustainability and resiliency of the global space ecosystem which every continent, country and community now depend upon for their economic and national security.

Space Foundation’s Global Alliance team looks forward to reviewing and providing post-election analysis and continuing to inform our members and the space community of important policy items and leaders.

Space Foundation is a nonprofit advocate organization founded in 1983, offering a gateway to information, education and collaboration for space exploration and space-inspired industries that define the global space ecosystem. Driven by a partnership model, Space Foundation operates three divisions that unite the entire spectrum of stakeholders — business, government, education and local communities — through corporate membership, sponsorship, fundraising and grants. Symposium 365 is the premier source for media and events, including the world-renowned Space Symposium and The Space Report. Center for Innovation and Education is a lifelong learning provider. Global Alliance facilitates collaboration around the world.