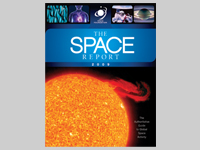 COLORADO SPRINGS, Colo. (Apr. 14, 2009) — The Space Report 2009: The Authoritative Guide to Global Space Activity has revealed that worldwide space revenues grew nearly 2.5 percent in 2008, rising to $257 billion. This is one of many fascinating facts revealed in the publication — the definitive overview of the global space industry and a valuable resource for government and business leaders, educators, financial analysts, students, and space-related businesses. Copies may be purchased at www.TheSpaceReport.org.

Space industry stocks suffered along with the world economy in 2008, declining 45 percent in 2008, erasing the gains from three consecutive years of growth. Still, space investment and output remain strong and the long-term outlook for the global space industry is encouraging.

The Space Report 2009 is the result of extensive research by the Space Foundation and its team of independent research organizations, thoroughly examining the state of the space industry. The methodology, which is refined every year, involves identifying, gathering, analyzing, and synthesizing data from publicly available sources, as well as industry publications and reports.