Let's Recommit to Space For the Economy's Sake 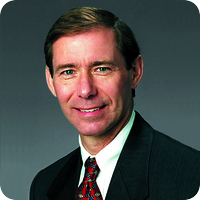 This month’s The View From Here is a viewpoint from a different place: it’s a reprint of an editorial penned by Col. Brewster Shaw, USAF (retired), that appeared May 19 in the Houston Chronicle.

The dramatic images of a space shuttle launch lighting up the Florida sky, or of a spacewalking astronaut hundreds of miles away, sometime mask one of the true achievements of America’s space program: the economic development it has spawned here on Earth.

Our national ambition to explore space has brought us tremendous discovery and unparalleled moments of pride. It has also created an industry. The aerospace sector has created tens of thousands of well-paying, high-tech jobs and generated thriving communities — all of which are under threat if our government doesn’t act quickly.

The United States is rightly looking to the next phase of its space exploration agenda. For several years, NASA and its industry partners have been working on new spacecraft to return humans to the moon and — when the mission calls — journey beyond to destinations such as Mars.

Even as currently envisioned, the years-long gap between the first flight of this new initiative, known as the Constellation Program, and the last flight of the space shuttle next year could result in nearly 10,000 layoffs by NASA’s largest contracting firms. Delaying key decisions or making major changes to current development programs could only exacerbate this problem. My company, Boeing, and others could lose many of the engineers who, through their unique experiences working on the space shuttle, International Space Station and other programs, are among the United States’ most important strategic assets.

President Obama understands the importance of American leadership in space, science and technology. He recently pledged to exceed space-race levels of research and development funding. “Other countries are now beginning to pull ahead in the pursuit of this generation’s great discoveries,” he said. “I believe it is not in our character, the American character, to follow. It’s in our character to lead.”

The president’s commitment is encouraging. Boeing and companies like it have been investing in exactly the kind of human capital development that will be needed to fulfill President Obama’s vision. But in this noble pursuit of a robust new generation of scientists and engineers, let’s not leave behind the ones we have.

NASA and its industry partners have been working for several years to transfer the capabilities of our people to the next generation.

Together, we’ve developed retention packages to ensure skilled engineers stay with the space shuttle through its last flight, and we’ve offered wide-ranging retraining programs. We’ve alleviated job losses within the budgetary and policy guidelines we’ve been given.

Still, thousands of our talented teammates are facing pink slips.

I’d like to see the administration and NASA not only recommit to development of components like the Ares V cargo launcher rocket and the Altair lunar lander, but also speed up awarding of these contracts. Thousands of jobs could be saved if NASA were allowed to put its contractors to work sooner rather than later on these important components.

America’s space agency has a strong history of learning from past mistakes. After the Apollo program ended abruptly in the 1970s — with the first flight of the shuttle still years away — NASA experienced exactly the kind of brain drain I now fear. It took years, maybe decades, to recover. In the 1970s, there was little time to plan. This time, not only do we have the benefit of hindsight — we have foresight.

We know this personnel crunch is coming. We can do something about it.

Shaw, who serves on the Board of Directors of the Space Foundation, is vice president and general manager of Boeing Space Exploration, headquartered in Houston. As an astronaut, he flew three Space Shuttle missions — as pilot of STS-9 in 1983, commander of STS-61B in 1985, and commander of STS-28 in 1989.