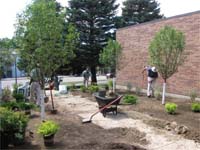 A grand opening celebration is planned for Aug. 26 from 11:00 a.m. to 1:00 p.m. to give parents and community members a chance to become part of the new school.

The new aerospace-themed middle school was created through a partnership between the Space Foundation and Colorado Springs (Colo.) School District 11 (D-11). The curriculum, which is collaboratively developed by the Space Foundation and D-11, uses space and aerospace themes and principles to teach a broad range of subjects, with focus on improving students’ proficiency in science, technology, engineering, the arts, and mathematics (STEAM).

The campus will house the new Space Foundation Discovery Institute, providing space- and aerospace-themed professional development, training and support for teachers and students from around the world, and serving as the base location for the Space Foundation’s popular education programs. It will house classrooms, a NASA Educator Resource Center, and eventually include three major laboratories: a simulated space mission operations center to open in early 2010; a simulated Martian terrain laboratory to open in early 2011; and, as funding becomes available, a Science on a Sphere facility in early 2012.

The Jack Swigert Aerospace Academy is named in honor of Colorado native and astronaut John L. “Jack” Swigert, who served on NASA’s Apollo 7 and Apollo 13 missions. Swigert died of bone cancer in 1982 shortly after being elected to the U.S. House of Representatives.