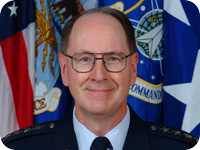 Gen. Kehler entered the Air Force in 1975 as a distinguished graduate of the Air Force ROTC program. He has commanded at the squadron, group, and wing levels, and has had a broad range of operational and command tours in ICBM operations, space launch, space operations, missile warning, and space control. He commanded a Minuteman ICBM operations group at Whiteman AFB, Mo., and the Air Force’s largest ICBM operations group at Malmstrom AFB, Mont. He served as deputy director of operations, Air Force Space Command; and commanded both the 30th Space Wing at Vandenberg AFB, Calif., and the 21st Space Wing, Peterson AFB. Most recently, as deputy commander of the U.S. Strategic Command, he helped provide the President and secretary of defense with a broad range of strategic capabilities and options for the joint warfighter through several diverse mission areas, including space operations, integrated missile defense, computer network operations, and global strike.

The general’s staff assignments include wing-level planning and tours with the Air Staff, Strategic Air Command headquarters and Air Force Space Command. He was also assigned to the secretary of the Air Force’s Office of Legislative Liaison, where he was the point man on Capitol Hill for matters regarding the President’s ICBM Modernization Program. As director of the National Security Space Office, Gen. Kehler integrated the activities of a number of space organizations on behalf of the under secretary of the Air Force and director of the National Reconnaissance Office.