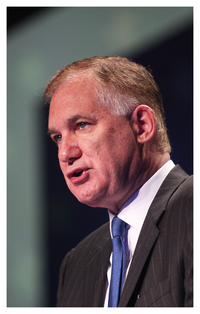 Speaking at the 26th National Space Symposium, the Honorable William J. Lynn, III, deputy secretary of defense, United States Department of Defense, laid out his department’s strategy to address the changing space environment, and the challenges it poses to military space.

He started by saying space assets give us the ability to: strike with precision, navigate with accuracy, communicate with certainty, and see the battlefield with clarity.

“These advantages make U.S. forces more accurate and agile than ever before,” said Lynn. “They extend the range and effectiveness of our military power. In short, they have changed the very nature of warfare.”

Lynn said that the Space Posture Review, which is examining each of space mission and the infrastructure that supports it, starts from the premise that space has become congested, competitive, and contested.

He discussed that by building systems on smaller satellites using modular components, the Operationally Responsive Space (ORS) program gives us the ability to rapidly augment space systems, delivering capabilities in a fraction of the time it takes to build larger platforms. The first ORS satellite, which will support operations in Afghanistan and Iraq, is on track to meet the goal of going from program start to launch in 24 months.

Lynn also discussed an innovative, longer-term approach to reducing vulnerability called spacecraft fractionation. “The idea is to avoid the vulnerabilities of a single large platform by breaking up space systems into many component parts,” said Lynn. “These parts would then be broadly distributed in space, but connected together through a wireless network.”

According to Lynn, these fractionated platforms are harder to attack, easier to augment, and the disaggregated nature of their components makes it possible for smaller developers to enter the military satellite market.

Lynn also discussed the importance of operating effectively in a challenging fiscal climate. “Either the department, in partnership with the industrial base that supports us, can become more efficient,” said Lynn. “Or, we will be eventually forced to reduce programs, and ultimately to diminish capabilities.”

Among the fiscal issues he outlined was space acquisition, which Lynn says has been improved, but still has “a long way to go.” Among the steps the DoD is taking are:

In light of new competitiveness, Lynn said the Space Industrial Base Council looks continually at the capabilities of the base to ensure the industrial capacity to execute national space strategy.

“Our heightened focus on industrial policy comes at a difficult time in the space industry,” said Lynn. “The realignment in civil space, together with competition from outside the United States, has placed new stress on the vendor base. Third and fourth tier suppliers face real business uncertainty. On a broader level, we face a problem that we simply can’t buy our way out of.”

He said that, in the past, the first course in resolving an industrial base problem was to spend additional dollars, but in the current climate, that would be difficult, and irresponsible. Two solutions, according to Lynn, are:

“In the end,” said Lynn, “we need a partnership where the government provides predictability and industry responds with performance.”

He also discussed export control reform, saying that “the most technologically advanced nation in the world is the least able to use its technology to aid our allies, even when they are fighting alongside us. And in the process, some of our most dynamic industries are prevented from accessing international markets.”

Lynn called for a system of export control “that builds higher walls around many fewer systems.”

He ended by saying, “We need to draw on the knowledge the space industry has developed over the past six decades. And, we need to build upon the partnership between government and industry that has led to so many past successes.