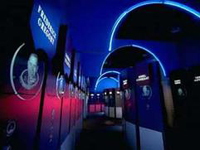 COLORADO SPRINGS, Colo. (Jun. 1, 2010) — Kathy Thornton, Ph.D., a mission specialist during the first three-person spacewalk flight and a current member of the Space Foundation Board of Directors, and Guy Bluford Jr., Ph.D., the first African- American to fly in space and a Life Director of the Space Foundation, are among four former NASA astronauts being inducted into the U.S. Astronaut Hall of Fame® this weekend at a ceremony at Kennedy Space Center Visitor Complex in Titusville, Fla.

Ken Bowersox, pilot of the first maintenance mission to restore NASA’s Hubble Space Telescope, and Frank Culbertson Jr., commander of the first Space Shuttle night landing at Kennedy Space Center, are also being inducted. This is the ninth group of Space Shuttle astronauts inducted, bringing the number of space explorers enshrined in the Hall of Fame to 77.

NASA Television will cover the 2010 induction ceremony live on Saturday, June 5, at 2:30 p.m. EDT. It is hosted by Jon Cryer, Emmy-Award-winning star of the TV series Two and a Half Men, and will feature NASA Administrator and former astronaut Charles Bolden. Space Foundation CEO Elliot Pulham and Director – Corporate Member Services Roz Clark will attend the June 4 dinner and gala preceding the induction ceremony.

About Thornton
A four-time Space Shuttle astronaut, Thornton served as mission specialist aboard the first Hubble Space Telescope (HST) repair mission, STS-61, alongside fellow inductee Ken Bowersox and partnered with astronaut Tom Akers on two spacewalks to replace the solar arrays, install corrective optics, and add additional computer memory. In 2008, Thornton became director of the University of Virginia’s Center for Science, Mathematics and Engineering Education. She was elected to the Space Foundation Board of Directors in 2010.

About Bluford
Bluford, a four-time space shuttle astronaut, assisted in developing techniques for nighttime operations as a mission specialist and flight engineer aboard STS-8, the first night launch and landing of the Space Shuttle. He was elected to the Space Foundation Board of Directors in 2000 and re-elected for a second term to serve until 2007. He was name a Life Director in January 2007.

About Bowersox
A five-time Space Shuttle astronaut, Bowersox piloted the precedent-setting mission to the crippled Hubble Space Telescope (HST) in December 1993, STS-61, capturing and restoring it to full capability through a record five spacewalks. He is now vice president of astronaut safety and mission assurance for SpaceX.

About Culbertson
A three-time Space Shuttle astronaut, Culbertson commanded STS-51, which successfully deployed the Orbiting Retrievable Far and Extreme Ultraviolet Spectrometers/Shuttle Pallet Satellite, the first in a series of Astronomical SPAS missions. He now serves as senior vice president and deputy general manager of the Advanced Programs Group for Orbital.

About the Astronaut Hall of Fame®
Based on an idea for an astronaut memorial developed by the six surviving Mercury 7 astronauts, the Hall of Fame opened in the 1990s. Part of the Kennedy Space Center Visitor Complex, it houses the world’s largest collection of personal astronaut memorabilia. The Astronaut Scholarship Foundation (ASF) supervises the selection, by an outside committee, of astronauts for enshrinement in the Hall of Fame, obtains personal artifacts for display in the museum, and participates in induction ceremonies. For more information, click here.

The AMF also collaborates with the Space Foundation and NASA on selection of the Alan Shepard Technology in Education Award, which was presented to Tennessee teacher Allen V. Robnett at the Opening Ceremony of the 26th National Space Symposium in Colorado Springs in April.