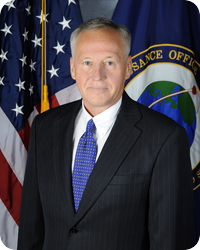 Popular speaker Gen. Bruce A. Carlson, USAF (Retired), will be a featured speaker at the 27th National Space Symposium, which will be held April 11-14 at The Broadmoor Hotel in Colorado Springs, Colo. As the 17th director of the NRO, Carlson directs the agency responsible for space reconnaissance systems, intelligence-related U.S. national security activities and collection from space. Carlson also spoke at the 26th National Space Symposium (to see coverage, click here).

Carlson’s career includes a broad range of military, space and intelligence assignments. He was commissioned as an Air Force officer after graduating with distinction from the Air Force ROTC program at the University of Minnesota, Duluth. A command pilot with more than 3,700 flying hours in ten different aircraft, his flying assignments included commanding the Air Force’s first stealth fighter wing, the 49th Fighter Wing at Holloman AFB, N.M. His staff assignments included positions at Tactical Air Command, Headquarters U.S. Air Force, and the offices of the Secretary of the Air Force and Secretary of Defense. He also served as the director of force structure, resources and assessment on the Joint Staff; commander of the 8th Air Force, Barksdale AFB, La.; and Joint Functional Component Commander for Space and Global Strike, U.S. Strategic Command, Offutt AFB, Neb.

Register Now and Save
For more details on the 27th National Space Symposium, see related article in this issue of Space Watch. Industry attendees who register before Jan. 14, 2011, can save up to $500 with the Super Early Bird rate. To register and to get more information, including agenda, speakers and exhibitors, click here.