An informal survey conducted this year by the Space Foundation has revealed that a wide variety of people - real and fictional - inspire us as space heroes. Astronauts get most of the spotlight and, even with the extraordinary space activity we've seen at the International Space Station (ISS) and in the Space Shuttle program, the astronauts we remember most came from the Apollo, Gemini and Mercury programs of the past century. 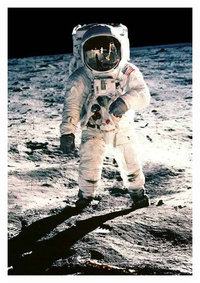 Astronauts comprise 49 percent of the responses to the question, Who is your space hero?, followed by fictional characters at 13 percent, scientists and ground staff at 9 percent each, business leaders at 6 percent and policy-makers/administrators at 5 percent. The rest of the responses included teachers, writers, reporters and even a robot and two dogs - one a real space traveler and one a cartoon character.

The top ten responses were:

The first woman to be ranked in the survey is Space Shuttle Astronaut Col. Eileen Collins*, USAF (Retired), first female pilot and first female commander, who tied for 11th place with the other high-ranked fictional character, Capt. Jean-Luc Picard, also of the Starship Enterprise from the 1980s television series, Star Trek: the Next Generation. Collins will appear on a panel at the upcoming 27th National Space Symposium.

The open-ended survey was conducted by the Space Foundation over the past several months.

Pulham Comments on Survey Implications
"Almost every space enthusiast can point to a person or character who served as an inspiration," said Space Foundation CEO Elliot Pulham. "We wanted to better understand who is considered to be most influential to help guide us in our public outreach and education programs."Pulham went on to note the survey points out some of the powerful aspects of the space industry, as well as some of its weaknesses.

"First, the history of space exploration has a disproportionately high number of extraordinary men and women, known for their bravery, their intellect, their vision and their capacity for demanding work," said Pulham. "Space heroes tend to be national heroes, appealing to a diverse population.

"But, the heroes we recognize - both real and fictional - tend to be the groundbreakers from an earlier era," he continued, pointing out that despite incredible discoveries and some extraordinary accomplishments, very few people can even name current astronauts and scientists. "This malaise results in what we've seen in recent years: inadequate funding and diminished public support for a pursuit that is responsible for much of what we know about science; for countless products and services that make our lives easier, safer and more convenient; for our national security; and for one of the most effective platforms for international cooperation we've ever seen."

Pulham said that the Space Foundation was pleased that people recognize that multiple professions play important roles in a successful space program. "It's not just astronauts, it's scientists, teachers, engineers, writers, businesspeople, policy-makers and even entertainers."

The Space Foundation also annually presents an award named after one of the ninth ranked heroes; the Alan Shepard Technology in Education Award recognizes outstanding contributions to technology education by K-12 educators or district-level education personnel.