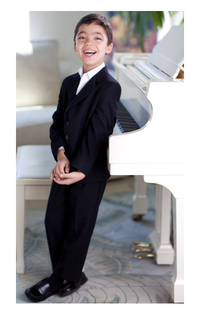 Following through on its mission to inspire the next generation, the 27th National Space Symposium will open with a performance by nine-year-old piano prodigy Ethan Bortnick.

“Ethan epitomizes the promise of his generation,” said Space Foundation Chief Executive Officer Elliot Pulham. “He is talented, creative and caring. His performance supports the Space Foundation’s mission to inspire, enable and propel humanity by underscoring the importance of investing in the next generation of leaders. Our generation must enable them to become a conscientious world of ‘doers’ and inspire them to show compassion for others.”

The Opening Ceremony will be held on Monday, April 11, 2011, at The Broadmoor Hotel in Colorado Springs, Colo., and is sponsored by Northrop Grumman.

Bortnick has appeared on national TV shows on every major network including The Tonight Show (four times since 2007), The Oprah Winfrey Show, Good Morning America and The Martha Stewart Show. He has performed in concerts and televised specials, both nationally and internationally and has made a name for himself as one of the world’s youngest philanthropists, using his talent to help people, especially children. Through concert and charity events, Bortnick has shared the stage with legendary artists including Elton John, Natalie Cole, Smokey Robinson, Beyoncé, Reba McEntire and many more.

In August 2010, he achieved the honor of being the youngest musician with a PBS concert special. Recorded at the historic El Rey Theatre in Los Angeles, Ethan Bortnick and His Musical Time Machine featured Bortnick performing musical classics from all eras and included guest appearances by artists such as Arturo Sandoval and Gloria Gaynor. The concert special was released on CD/DVD on Oct. 26 through Razor & Tie. In January, Bortnick will take his musical time machine on the road for his first national headlining tour, visiting more than 20 cities across North America.