Ambassador Schulte Will Speak at Symposium 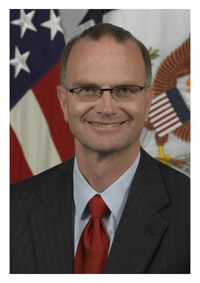 Presented by the Space Foundation, the 27th National Space Symposium will be held April 11-14 at The Broadmoor Hotel in Colorado Springs, Colo., and brings together all sectors of space to highlight accomplishments and address opportunities and issues facing the global space community today.

About Schulte
Ambassador Schulte, who now serves as Deputy Assistant Secretary of Defense for Space Policy, was previously U.S. permanent representative to the International Atomic Energy Agency and the United Nations in Vienna, where he was dispatched by President George W. Bush in 2005 and extended by President Barack Obama through June 2009. He helped report Iran to the UN Security Council, implement the U.S. nuclear cooperation agreement with India and establish international nuclear fuel banks. After his assignment in Vienna, Schulte was a senior visiting fellow at the National Defense University's Center for the Study of Weapons of Mass Destruction. He served three tours in the White House under two Presidents: as executive secretary of the National Security Council (NSC); as senior NSC director for Southeast European Affairs; and as special assistant to the President. Schulte graduated from the University of California at Berkeley and earned a Master in Public Administration degree from Princeton University's Woodrow Wilson School.