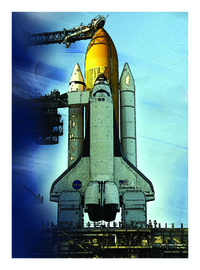 Ask anyone on the planet to identify this picture and the chances are good that they’ll know it is a U.S. Space Shuttle. Of the dozens of launch vehicles in use around the world, only the Space Shuttle has achieved this iconic status.

(Before anyone sends me any nitpicking, technical e-mail, I’ll acknowledge here that what we’re really looking at is the Shuttle “stack” – i.e. a shuttle orbiter, mounted to its external fuel tank, paired with its solid rocket boosters, atop the mobile transporter launch pad.)

I normally don’t like to use my column to tout what’s going on at the National Space Symposium, but Industry Salutes the Space Shuttle is something different, something special and something that will only happen once. We will honor the service of all six orbiters – Atlantis, Challenger, Columbia , Discovery, Endeavour and Enterprise – and the people who made them fly. In addition to our tribute, we will present a specially commissioned sculpture to NASA, engraved with the simple message: “To the thousands of men and women whose intellect, dedication and passion made the Space Shuttle program a success.” And we will debut a special collection of commemorative artworks, developed in cooperation with NASA, featuring unique images of each of the orbiters. (The picture that illustrates this The View From Here is part of one of those images; to learn more, click here.)

We will not mourn the loss of Challenger, Columbia and their crews. We will not debate the country’s possible paths forward. Rather, we will pay tribute “To the thousands of men and women whose intellect, dedication and passion made the Space Shuttle program a success.”

And why not? After 30 years of service, the Space Shuttle program is indeed something to celebrate. To quote a NASA website:

NASA’s Space Shuttle fleet began setting records with its first launch on April 12, 1981, and continues to set high marks of achievement and endurance. Starting with Columbia and continuing with Challenger, Discovery, Atlantis and Endeavour, the spacecraft has carried people into orbit repeatedly, launched, recovered and repaired satellites, conducted cutting-edge research and built the largest structure in space, the International Space Station.

As humanity’s first reusable spacecraft, the space shuttle pushed the bounds of discovery ever farther, requiring not only advanced technologies but the tremendous effort of a vast workforce. Thousands of civil servants and contractors throughout NASA’s field centers and across the nation have demonstrated an unwavering commitment to mission success and the greater goal of space exploration.

Of course, there are many “wow” factoids about the Space Shuttle. You’ve probably seen some of these:

If you’ve been in the space community for any length of time, you’ve probably been touched by the Space Shuttle program. If you’ve been to a Space Shuttle launch at Kennedy Space Center, you know you’ve witnessed one of the most awe-inspiring technical accomplishments in the history of mankind. In fact, if you like to share your personal Space Shuttle memories or experiences (including photos), just email them to [email protected]. We’ll share your memories on our website and here in Space watch over the coming months.

The View From Here is that, whether you’re attending the 27th National Space Symposium or not, you’ll want to join us at The Broadmoor Hotel on April 12 for the Industry Salutes the Space Shuttle luncheon – a fitting tribute to the most iconic spacecraft of our time.