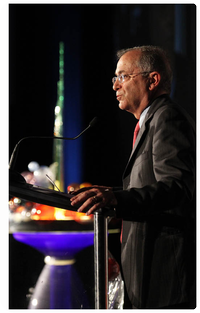 The award was presented by Dr. William F. Ballhaus, Jr., chairman of the Space Foundation board of directors, at a special luncheon co-sponsored by Raytheon at the Space Foundation’s 27th National Space Symposium at The Broadmoor Hotel in Colorado Springs, Colo.

Elachi is the first NASA center director to be selected as a Hill Award winner, which can only be conferred by unanimous vote of the Space Foundation board of directors. In his acceptance speech he thanked the teams he has worked with at NASA, CalTech and the U.S. Air Force, saying that “space is a team, rather than an individual, endeavor.”

Speaking about his own familiy’s sacrifices to ensure that he had a good education grounded in the sciences, he said the U.S. cannot afford not to invest in our future. He also spoke of the incredible benefits space has brought to everyday life on Earth, often without the benefactors even being aware.

Elachi joined JPL in 1970 and was named its director in 2001. He has been a principal investigator on a number of research and development studies and flight projects sponsored by NASA, including the Shuttle Imaging Radar series, the Magellan Imaging Radar and the Cassini Titan Radar. As the director for Space and Earth Science Programs at JPL from 1982 to 2000, he was responsible for the development of numerous flight missions and instruments for Earth observation, planetary exploration and astrophysics.

In 1988, the Los Angeles Times selected Elachi as one of “Southern California’s rising stars who will make a difference in L.A.” In 1989, Asteroid 1982 SU was renamed 4116 Elachi in recognition of his contribution to planetary exploration. In 2006, he was selected as one of America’s Best Leaders by U.S. News & World Report and the Center for Public Leadership at Harvard University’s Kennedy School of Government.

About the Award
The Space Foundation annually presents the Hill award in honor of its late, long-time chairman, Gen. James E. Hill, USAF (Retired). The award recognizes outstanding individuals who have distinguished themselves through lifetime contributions to the welfare or betterment of humankind through exploration, development and use of space, or through use of space technology, information, themes or resources in academic, cultural, industrial or other pursuits of broad benefit to humanity. Previous recipients of the Hill Award include: