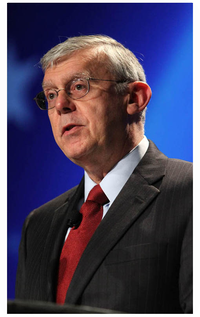 Stressing that the Air Force is relied upon to provide the full range of space capabilities including launch, GPS, space situational awareness and communications, Deputy Under Secretary of the Air Force for Space Programs Richard W. McKinney told the 27th National Space Symposium audience that the Air Force is modernizing virtually all of its legacy systems.

“We plan to focus on the fiscal environment we’re in and how it affects how the USAF plans and carries out its plans,” he said. “The Air Force has had to reorganize itself significantly to meet the challenges of the future.”

According to McKinney, over the past decade, the Air Force:

“But,” he said, “We’ve also canceled and truncated many acquisition systems and are dealing with substantial cost growth.”

Even though the Air Force is 7 percent smaller, McKinney said personnel costs have grown 16 percent. And, although energy use is down 16 percent, energy costs have increased three-fold. “With no prospect of real growth in top line budget authority, we must become more efficient.”

McKinney said that the Air Force and the Department of Defense have made a compelling case to Congress to continue robust defense spending and that he expects space to remain a core area for the Air Force. But, he added, that means that the Air Force must improve the acquisition process.

“One step the Air Force is taking is to increase military space capabilities that directly benefit the warfighters,” said McKinney. “We’re making investments in satellite communications, GPS, weather capabilities, situational awareness and we’re developing an acquisitions process that will result in cost savings.”

He went on to say that the first effort to implement EASE will be with Advanced Extremely High Frequency (AEHF) in 2012 and Space-Based Infrared System (SBIRS) in 2013. “We don’t believe EASE is going to fix all problems in the acquisition process, but is based on feedback over years,” McKinney said. “Industry partners need to find ways to help us meet these cost-savings.”

McKinney explained that the Air Force, in conjunction with the National Reconnaissance Office, delivers assured access to space through the Evolved Expendable Launch Vehicle (EELV) program, which has two families of launchers – Atlas V and Delta IV. “The operational success of EELV has been accompanied by increasing costs,” he said. “And we are aggressively scrutinizing EELV acquisition. A ‘should-cost’ review produced 84 cost-saving recommendations for near and mid-term. Many studies have said that eight cores must be purchased each year, and this will be done in the future. The Air Force signed a joint memorandum of understanding with the NRO and NASA to ensure consistent opportunities for new entrants to launch. The Air Force is at the leading edge of space, delivering the world’s most advanced space capabilities.”