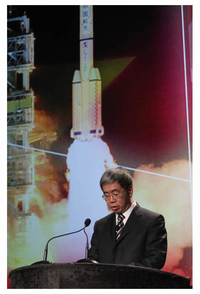 Saying that China has a strong cooperative history with many countries in a variety of space activities, Lei said that cooperation must be based on principles of mutual benefit, equality and peaceful use.

Noting that China’s space industry once had a good relationship with the U.S. in launch services and acquisition — 21 commercial launches with 26 U.S.-made satellites — Lei said that export control has “crippled cooperation.”

Saying that he hoped to reverse that trend, Lei noted that, in recent years, China has established an increasingly close relationship with the Space Foundation.

He also said that, in 2010, CASC carried out 15 launches, transporting 20 satellites into orbit.