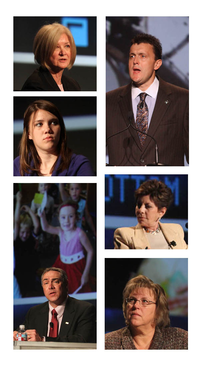 Education was a recurring theme at the 27th National Space Symposium, which featured student and teacher events, an education-focused Corporate Partnership dinner and a panel on Education and the Bottom Line – The Corporate Role.

Conrad opened by noting that education needs in a knowledge-based economy are critical and immediate, saying “We have so many pieces in place; the challenge is assembling these pieces to meet current challenges.”

Mortensen explained Raytheon’s “Math Moves You” program that, to date, has engaged more than a million “tweens” student participants and provides scholarships and teacher awards. She discussed Raytheon’s the “Sum of All Thrills” exhibit at EPCOT Center at Walt Disney World in Florida and explained that Raytheon is helping develop education policy by using its systems engineering capability to create a model for STEM education process flow. Saying that her company supports strong employee volunteer efforts for education, Mortensen said that Raytheon focuses on tweens and high school students with an objective of tying each level and element together to maintain continuity in STEM education.

Marshall discussed ULA’s corporate approach to STEM education, saying that his company funds more than 100 STEM programs nationally and is a national sponsor of President Obama’s “Change the Equation” effort. Citing ULA’s position that no child should be left behind for lack of educational tools, Marshall said that ULA has donated more than $3 million to STEM education efforts, including more than $600k to non-profit organizations this year.

Staubach said that BAH’s corporate programs for education include STEM education programs that match workforce volunteers with contributions to non-profit organizations, including NORAD Tracks Santa, as a pro bono STEM teaser. She said that BAH also values internal education because knowledge requirements are higher than ever and new skills are needed to maintain competitiveness. For example, she said, cyber-related education is not taught in school, but must be taught by companies. “The focus on both internal retraining and external creates both synthesis and tension between internal and external educational missions,” she said.

Diesch, who, along with her sister, won the Conrad Foundation’s 2010 Spirit of Innovation for their work creating a STEM toolbox to be donated to classrooms across the country. Her experience with this award has inspired a strong interest in promoting STEM education.

During the question and answer session, Mortensen pointed out that measuring the effectiveness of programs is a persistent problem. Conrad added that, while studies over the past few decades have yielded similar themes, corporations and non-profit organizations can simply go forth and do things, effectively mitigating some of the problems associated with measuring efforts. Staubach pointed out that part of the problem with many efforts is the danger of failure to deliver commitment over the long term — for example, an endowment must have 15-20 times as much money in the bank as awarded in a scholarship, simply to fund the award and maintain the endowment.

Marshall pointed out that education reform efforts suffer a “Winner v. Loser” syndrome, with the schools best positioned to get assistance and new innovative programs often already high-performing. “Help is most needed in places that have difficulty attracting support,” he said.

Conrad elaborated on this, pointing out that many groups, especially the government, continue to fund existing, well-known programs, yet keep expecting to get different results from continuing the same work. “Overall, students are best inspired by the ability to make and do concrete things, particularly in an evolving hands-on, non-traditional, application-based, immersive approach.”

She said corporations may have a very difficult time doing anything about addressing fundamental, structural issues, along with the problem of capturing students too late in the game, rather than when most valuable in the 3rd and 4th grades.

Finally, in closing, Conrad said that corporations and non-profits have a unique opportunity to address workforce and STEM challenges. “The policy impact is huge and offers the ability to influence employees, grow new employees and create a pipeline to flow people through this process,” said Conrad. “There is a great opportunity for hands-on engagement – we do well at innovation and need to leverage this though applications-based, immersive education.”