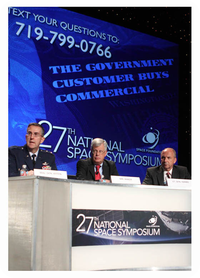 The entire audience was talking about the commercialization of U.S. space during National Space Symposium this past April in Colorado Springs. The Boeing Exhibit Center was filled with examples of potential commercial vehicles for carrying cargo and humans and many speakers addressed the issue indirectly or head-on during their presentations.

Graziani opened the panel by saying there is a clear mandate to do more without more funding and, therefore, commercial models will play an important part.

Hamel said that this creates a strong imperative for short cycle time, which, in turn requires improving understanding of what government wants to buy, beginning with end-user requirements. As an example, he said that government satellite cycle times can be as long as 10 years versus the typical 24-36 months for commercial users, which is an intrinsic result of the acquisitions and budgeting process. “We must understand how, when and where commercial providers can contribute,” Hamel said, noting that this learning curve could be difficult because “the space industry is very stovepiped and, as a result, lots of individual lessons learned have not been applied across all sectors.”

Hyten said that some things, such as nuclear-hardened communications, can’t be purchased commercially because “there is no market.” He also said that “operationally responsible space (ORS) plus commercial capabilities plus international partnerships is a marriage of ideas.”

Baker also called for improvement, noting that, without fundamental structural changes, space procurement will continue to have fundamental inefficiencies.