Where is NASA Going? 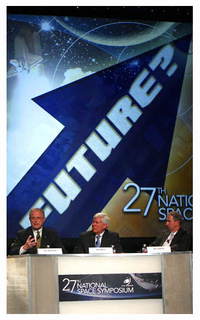 Another recurring theme at the National Space Symposium — and, indeed throughout the space industry — is the question of where NASA is heading.

Simpson started the discussion with an international perspective, saying that confusion about NASA’s direction is not limited to U.S. and that he believes the widespread debate indicates that many people are placing some importance on space.

He also said that global interest in the International Space Station (ISS) is higher than in U.S. “ISS a symbol of the United States as leader, but not as a sole proprietor,” he said.

In some arenas, Simpson said, NASA has been making good exploration progress and is “clearly moving in the right direction by embracing international cooperation on major products and by stimulating existing and new companies.” He added, however, that outside the U.S., people believe that “if the U.S. loses direction, everyone loses direction.”

Simpson completed his opening remarks by saying that civil space will suffer globally for lack of U.S. leadership. “There is lots of discussion globally about what to do in wake of Shuttle retirement,” he said. “We need to have heavy lift for many reasons, politically, technologically and so forth.”

Targeting specifically on direction, Griffin said “NASA’s ‘direction’ is a bit misleading; NASA doesn’t pick its direction, it’s an executive implementing agency. The ‘NASA direction’ discussion is really about national civil space policy, which is outside of NASA’s purview.”

Commenting on the core question of “what is the rationale for spending public money on exploration?” Griffin said, “Fifty years on, we haven’t settled this yet. But, I believe the purpose is to extend human presence throughout the solar system, which has economic and security benefits.”

Griffin outlined a number of challenges NASA will face as it moves forward:

Looking at these issues, he said there are three ways it can be managed:

Griffin said that the new model allows for acquisition of non-market goods without use of federal acquisition regulations (FAR) and that “unless and until we want to overhaul FAR, it is utterly inappropriate to designate preferred providers who are exempt from FAR,” adding that “any mode of purchase that requires government to not act or inherently prevents government entry is inherently flawed.” The example he cited was that DoD employees can travel on both military jets and commercial airline. “They can co-exist,” he said. “in fact, commercial flight can be successful only when it doesn’t require government directives to exist.”

Nield commented that NASA’s mission is to explore, the FAA’s is to regulate, which allows for partnership. He added that initial discussions with other countries regarding regulation for point-to-point travel indicate that there is a prospect for international standardization, even if it might take a while to move forward.

He noted that it’s ironic that we are “marking 50 years of spaceflight accomplishments with the imminent end of U.S human spaceflight capability. But,” he continued. “We already have three rockets – Delta, Atlas and Falcon – so all we need are capsules. Many companies have said they’re ready, which will mark the first time this country has had multiple human spaceflight choices.”

Speaking for the FAA, Nield said that, regardless of NASA and Congressional direction, the FAA wants to promote commercial spaceflight and that, as a regulatory agency, the FAA can enable and support commercial efforts as fair and consistent regulators.

Additional points were made during the Q&A: