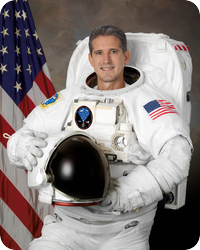 The Space Foundation will bring a true American hero to the Chick-fil-A Patriots’ Festival and Ride for Heroes to be held at Glen Eyrie Castle in Colorado Springs on Saturday, Sept. 10. The Space Foundation is a sponsor of the event and has arranged for NASA Astronaut Col. Michael T. Good, USAF (Retired), to sign autographs at the Space Foundation booth before presenting awards at a ceremony that begins at noon.

See information about the event at www.patriotsfestival.com.

About Good’s NASA Missions
Col. Michael T. Good served his country in the United States Air Force, logging over 3,000 hours in more than 30 different aircraft. He was selected by NASA as a mission specialist in July 2000. He served on the crew of STS-125, the final Space Shuttle mission to the Hubble Space Telescope, and on the crew of STS-132 to the International Space Station. He has logged 25 days in space and nearly 30 hours on four spacewalks.