The View from Here: Human Spaceflight in the Year of the Dragon 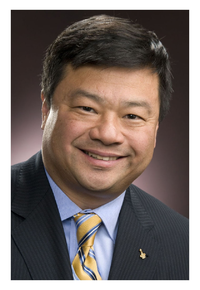 This month’s The View From Here comes to us from the Space Foundation’s new special advisor – human spaceflight, Dr. Leroy Chiao: As Elliot Pulham told you in last month’s Space Watch, the Year of the Dragon is upon us! What does this mean? Dragon years in the Chinese zodiac are particularly special and lucky. Bold things can happen during dragon years.

China recently released its white paper laying out plans in space for the next five years, including an ambitious human spaceflight (HSF) program. China’s HSF program started slowly, but it is accelerating. In the eight-plus years since Yang Liwei became the first Chinese national astronaut in 2003, China has completed only two additional crewed flights. They will be busy this year, though, with two scheduled HSF missions.

This spring, China plans to launch Shenzhou-9 (SZ-9) with a two-man crew to dock with their orbital docking target/module, Tiangong-1. This would be the first time for a Chinese crew to accomplish this feat. SZ-10, which is scheduled for a fall 2012 launch, is planned for a three-person crew, one of which would be China’s first female astronaut. These missions should set the stage for China to develop her own space station in the following years, and China has now publicly stated that it plans to send crews to the Moon.

Against this bold backdrop, the question being asked by the other spacefaring nations seems to be “Why is human spaceflight important?” This is true even in Russia, where cosmonauts are no longer awarded the Hero of Russia medal. So is it really important? Why do it? We all know that space programs are technology drivers and create technical spinoffs which help to improve life on Earth. We also know that space programs employ large technical workforces.

Those of us who are old enough, remember the excitement of the Apollo program. It was a wonderful time, and we Americans felt literally on top of the world, about ourselves and about our country. We felt that nothing was impossible. It certainly inspired me to want to become an astronaut, and it inspired other Americans to also dream, strive for the top and to be the very best in all fields of human endeavor.

The same was true when Space Shuttle Columbia was first launched in 1981. Americans were proud of having developed the first winged, reusable spacecraft. It says a lot that in the 30-plus years since then, many have tried, but no other country has ever built a crewed, winged orbital spaceplane. Most never got beyond the drawing board, and only the Soviet Buran made it into space on just one single-orbit flight, without a crew onboard. Americans remain very proud of the Space Shuttle program, as we should.

It is this kind of buzz that exists today in China. Pride is so great about their progress in space, that even on Taiwan, most people are impressed and feel connected to China’s space success. There are many studies which try to explain why China’s economy has been doing well. I believe these analyses leave out one important factor. The people are proud, and they currently live in an era where they feel like they can do anything. They feel like they are accelerating forward, while other countries are either flat, or in decline. I believe pride in their space program contributes much to this optimistic outlook.

Between loss of our own immediate HSF capability, our financial woes and those of the Eurozone, it would be easy to be short-sighted. But, when a nation turns inward and stops pushing out, it begins a decline. That’s what has happened to former empires, most recently to some of the former great sea-faring nations of the world. Fortunately, America continues to operate the International Space Station (ISS), along with our international partners. And the United States has active HSF programs, albeit less well funded than hoped.

But America needs to re-capture the buzz. What can we do while the new programs are being developed? We can expand our leadership. America continues to set the standard for operating in space. In May 2009, Chinese space officials were visibly awed during their tour of NASA’s Johnson Space Center. From the Shuttle mission operations control center, they observed live extravehicular activity during the fourth Hubble Space Telescope servicing mission. Moments later, they were in the space station mission operations control center, observing real-time operations aboard the ISS. Simultaneously, China’s technology is advanced, but they have had very little operational flight experience. What they couldn’t even begin to imagine how to do, NASA made look easy.

Expanded international cooperation is the way for us to continue our leadership in space. We can and should lead an international, beyond-low-earth-orbit space exploration program, building on the international framework that we established for the ISS. It’s time to expand that framework by including countries like China, which has much to offer in spacecraft and launchers. When better than during this year of the dragon?