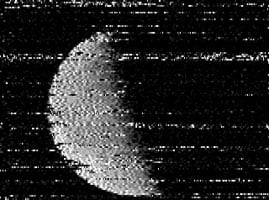 The Space Foundation’s annual Student Art Contest winners are developing a reputation for actual space travel. Digital versions of last year’s winners are all permanently in residence on the International Space Station. Two of this year’s winners have traveled an additional 277,000 miles to the Moon and back.

Two of the winning pieces of artwork – both in the 6th – 8th grade painting category – were selected by media artist Daniela de Paulis to be part of her worldwide OPTICKS project, which projected a total of ten digital images of artwork onto the surface of the Moon on April 28 and intercepted the altered reflections, thus creating new images.

The “bounced” Space Foundation student art was created by:

Part of Global Astronomy Month for the second year in a row, de Paulis’ OPTICKS project was coordinated in collaboration with CAMRAS radio amateurs association based at Dwingeloo radio telescope in The Netherlands. OPTICKS is a live performance during which digital images are sent to the Moon in the form of radio signals from a dish situated in Brazil, Poland, the UK or Switzerland and received back by Dwingeloo radio telescope. The name, OPTICKS, was inspired by Sir Isaac Newton’s discoveries of the light spectrum, reflection and refraction. At the end of the OPTICKS event, de Paulis and the CAMRAS team sent the images of the seven colors of the spectrum to Earth’s closest star (other than the Sun), Epsilon Eridani, situated at a distance of 10.5 light years and known to host a planet.

Following are the original and the moonbounced images:

Moonbounced images are the property of Daniela de Paulis and the OPTICKS project, www.opticks.info.

About de Paulis
Living and working between Italy and The Netherlands, Daniela de Paulis has a degree in fine arts from the Accademia di Belle Arti, Rome, Italy, and a Master’s Degree in Fine Arts from the University of Plymouth, United Kingdom. Her work has been exhibited internationally. Qualified as an art educator, she teaches art for both adults and young learners. Since 2009, de Paulis has been artist in residence at Dwingeloo radio telescope, where she developed, together with Jan van Muijlwijk and the CAMRAS team, a new way of communicating via the Moon, now called Visual Moonbounce. Her latest work is the short film, le Voyage dans la Lune, inspired by the 1902 film by George Méliès, and featuring ‘moonbounced’ images. De Paulis is currently a Ph.D. student at Leiden University, The Netherlands.

About the Space Foundation Student Art Contest
Each year, the Space Foundation invites students from around the world in pre-kindergarten through 12th grade to submit original artwork in three categories — painting, drawing and multimedia – depicting a specific space theme. The art is judged by a panel of art experts and the winners receive prizes and recognition by the Space Foundation. The 2012 theme was “Space is Infinite — Explore!” The 2012 contest was co-sponsored by ARES Corporation and Fisher Space Pen. See all of the winning artwork, the award video and details about the contest at: www.spacefoundation.org/education/student-art-contest