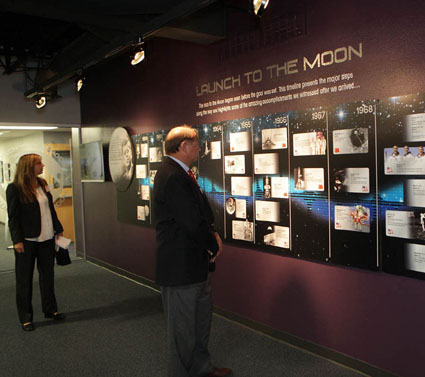 The Space Foundation recently opened the El Pomar Space Gallery, home to the Space Foundation’a collection of space artifacts. Our initial exhibit, Launch to the Moon, chronicles the 1959-1976 United States and Soviet Union space race, with focus on the goal to be the first to the Moon.

Housed in the Space Foundation’s world headquarters at 4425 Arrowswest Dr. in Colorado Springs, Colo., the gallery is open to the public from 10 a.m. to 5 p.m. every Tuesday and Thursday and on the first Saturday of each month.

The Launch to the Moon exhibit includes:

For many Americans, the race to the Moon stirred lasting interest in space. Back in 2009, the Space Foundation solicited stories recalling the Apollo 11 mission and the thrill of seeing humans step onto the Moon for the first time. Here’s what some of our friends told us:

As Apollo 11 approached the Moon, my father, an Air Force pilot, was on his way to Viet Nam for a one-year tour of duty. We were living in Austin, Texas, dreading Dad’s departure, but the Apollo 11 mission provided my brothers, sisters and me with a powerful –  if temporary – diversion. In fact, you could say our collective fascination with aviation transformed into a family obsession with space flight. I always wondered why Buzz Aldrin didn’t go first. Years later, I realized that he was the lunar module commander, so it was his job to ensure the ship’s safety so that Armstrong could step out first. Everyone remembers who’s first; but it takes a huge person to accept the role of No. 2. I got goosebumps not when Armstrong and Aldrin stepped on the Moon, but when they stepped out of the capsule after a successful splashdown. I knew that if they could come home safely from the Moon, then so could my Dad from Viet Nam. – Charley, American Airlines, DFW Airport, Texas

Relive the story of the first men on the Moon here.