Hyten began by noting that he spends more time on cyber than on space because the challenges are so enormous, saying, “If we don’t defend it all the time, we’re going to have significant problems.”

Among the projects he outlined were: 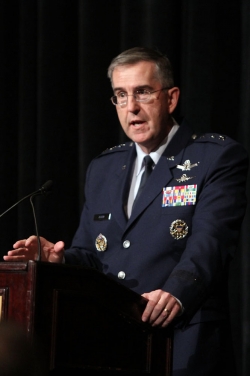 Hyten also discussed the joint information environment (JIE), saying that he is “the biggest believer in that kind of consolidation and information environment,” but that he has questions about security and the ability to defend the network. “The goal is timely access to critical resources, a single security architecture, and centralized and standardized enterprise services,” he said. “How can anybody argue against that? My concern is that we don’t have a lot of detail below that top level description.”

He said his top three concerns with JIE are:

He explained that IT is “any equipment, interconnected system or subsystem of equipment used in, among other things, the storage, movement, transmission or reception of data or information.” 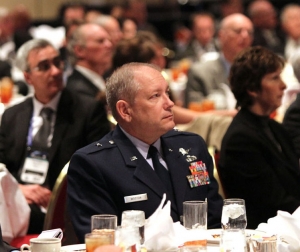 Hyten said, “The domains I’m given wearing this uniform are air, space and cyberspace. In the Air Force we organize, train and equip forces to allow combatant commanders to fight and win wars. So that’s what we have to do in cyberspace as well. CYBERCOM is the place where we’re going to present forces.”

He said the services, the Air Force among them, are going to have to build mission teams to present mission ready forces to CYBERCOM as well as the other combatant commanders. “For our part, we’re already working with the Air Staff to get the requisite manning…. CYBERCOM has already begun to lay out what kind of team composition they have to have, and our future in cyberspace basically depends on us getting this right.”

He closed by saying that the cyberspace domain is a priority for this nation, for the DoD and the Air Force. “Our success on the battlefield depends on the timely movement of information,” he said. “In the last 30 years, that’s what’s made us the greatest military the world has ever seen. Our adversaries are going to attack our ability to move information and they’re going to identify this as a key center of gravity, an asymmetric advantage if they can take it out.

“There’s no doubt that our number one asset as a nation, as a military, is our soldiers, sailors, Airmen and Marines. But if they don’t have the information they need to do their jobs, they will not be able to fight effectively,” he said.

“So we must be ready to meet any adversary in cyberspace that presents themselves – from the smallest individual to the largest nation state.”

See video of the luncheon here. 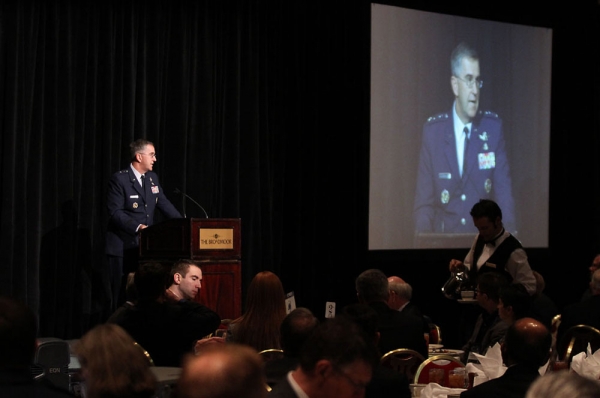