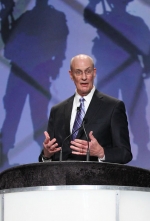 Estes kicked off the discussion saying that changes in defense spending will change operations. He offered three goals for tackling budget cuts:

He posited that Anti-Access Area Denial (A2AD – getting control of the area you are going to operate in – air, sea, cyberspace, etc. – and making sure you deny that area to your adversary) prevents U.S. forces from moving forward.

He then turned the discussion to the panelists.

Fitzgerald (pictured, right) said that space is an integrator with all sectors of warfighter at play, including cyber, space and conventional warfare. Regarding A2AD, he suggested that the response be “offense in depth; near and far, and hold the enemy’s key infrastructure at risk.” He went on to say that air-sea battle concepts allow ideas about to economically counter A2AD, including: countering ballistic and cruise missile threat; operating in highly contested electromagnetic environment and command and control. Noting that “networks and communication are important,” Fitzgerald asked, “How do we tailor information and get it from space grid to terrestrial grid?”

Commenting that “we’re at a turning point for warfare and we will not be able to continue to conduct warfare thru paradigm of the past century,” Deptula said information-centric, functionally integrated measures are key. He said that he disagrees with those who argue that network-centric warfare is over-reliant on digital technology and that we need “a paradigm shift from individual unit cost to thinking about cost-per-desired-effect” to assess real value. 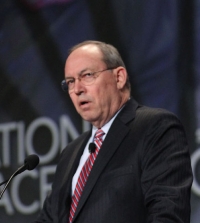 When asked how to do things differently in the future, Deptula (pictured, right) said that budget constraints will force services to focus on interdependence. Fitzgerald said that we must get at the way we procure joint systems; “Having a single program office is probably the way to go.”