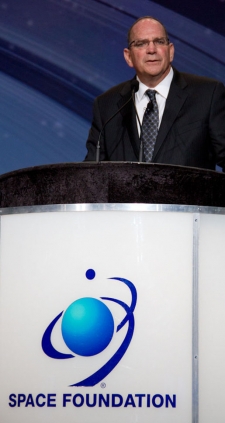 GenCorp President and Chief Executive Officer Scott J. Seymour spoke to the 29th National Space Symposium audience on April 11, beginning his speech by reflecting on why the Space Symposium attendees have chosen space as their passion. He said that a primary reason is “harnessing space to protect the freedoms we cherish … ensuring those freedoms for future generations and enhancing our way of life.”

Seymour outlined space capabilities that enhance national security, including global awareness and global communications. He spoke about how space capabilities enable scientific missions, including missions that have significant impact on our way of life by providing a better understanding of our planet and its environment and missions that reveal origins of weather patterns leading to better prediction and disaster mitigation. He also mentioned how enabling global communications networks is instrumental to a strong and viable economy.

With government budget cuts and economic pressures, Seymour said that the primary issue is how to provide capabilities affordably and that, “Without action, we may have to do without.”

Choices Must Focus on ‘Innovation and Affordability’

He said the nation will have to make choices, which calls for “innovative thinking and innovative behavior … with a focus on affordability.”

He called for innovation from both “embryonic efforts and mainstream providers,” noting that leveraging established providers’ experience can prevent costly delays and mistakes. He noted Aerojet’s green propulsion systems and solar electric propulsion systems as examples, saying that these two plus another company’s two plus another two eventually creates a groundswell of solutions.

Seymour also called for teamwork and collaboration among government, industry and academia, saying that although it’s a hard concept, it “has never been needed more.

“The concept of a ‘single prime’ doing everything is long gone,” said Seymour. “We are used to the concept of ‘competimates.'”

He added that a way to forge teamwork is to look at space access from a global standpoint, sharing the financial and technical burden among nations.

Seymour closed by saying that space pioneers are venerated because they “did what people said could not be done.” He then challenged the industry, saying, “If we fail, there is nowhere else to turn, there is no one else to do it if we do not do it.”

Watch a video of his remarks here.